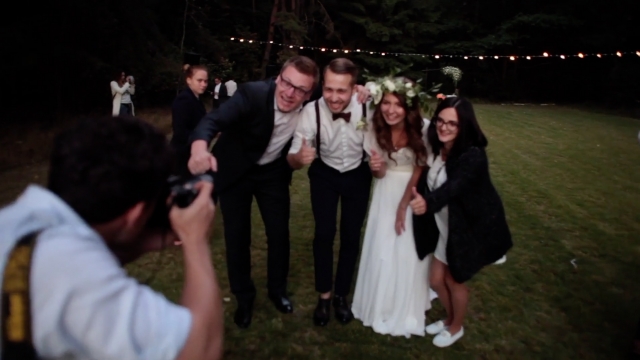 The pandemic pushed back many weddings, and now many wedding guests are struggling to attend due to inflation costs.

one shot by Newsy

As weddings are upon us, a record number of ceremonies are happening this year thanks to the pandemic, which has postponed a lot of celebrations until now.

But for wedding guests, attending can carry a hefty price tag, especially with costs rising due to inflation.

Cameron Robertson was invited to eight weddings this year, not just in various states but in various countries like Spain and Lebanon.

"It's been pretty rough in terms of the finances of it," Robertson said.

She's gone to three weddings so far, but had to say no to two events. She's undecided on the other three.

"It has been a struggle financially. But those that I've been able to attend have been wonderful and obviously I've had to have those rough conversations. I'm not one to necessarily want to say no to any wedding they're so fun," Robertson said.

The flights, hotels, gifts, cabs, and food can all add up.

Robertson agreed and said she's spent about $1,000 on each wedding.

That's around what Credit Karma says is the average for guests.

But their survey finds that 73% of guests say inflation is negatively affecting their ability to join celebrations. Polled guests say they are forced to take on debt or miss events completely.

"It's a lot of financial burden for one person to take on. And. You know, I'll make up for it other ways. But you know I can get you a good registration gift," Robertson said.

To make it work, Robertson stayed at friends' and family's homes, put some expenses on credit cards, and even got some financial help from her family.

"I'm not necessarily proud of saying that, but I have had to receive some financial support and to attend these weddings," she said.

Joseph Kraemer was invited to four weddings and extended parties.

"I've kind of had to pick and choose with, you know, the extended wedding functions such as bachelor parties," Kraemer said.

He decided to forgo one bachelor party resulting in one disappointed friend, but he thought of another option.

"I would love to celebrate you separately and, you know, maybe do something smaller, kind of closer to both of us. That way I can still be there and celebrate you, even though I'm not able to kind of join in the larger parties," he said.

Avshalom Gad, a certified financial planner at Eagle Strategies with New York Life, says if multiple wedding invites are in your future, don't let your heart overrule your head.

"You want to make sure that whatever you spend is based on your budget. You're not overspending just because you really miss your friend and you don't want to look bad and you have to go because everybody is going," Gad said.

He warns you don't want to spend all your savings now, and not just so you can retire some day. Because there will be more weddings ahead.