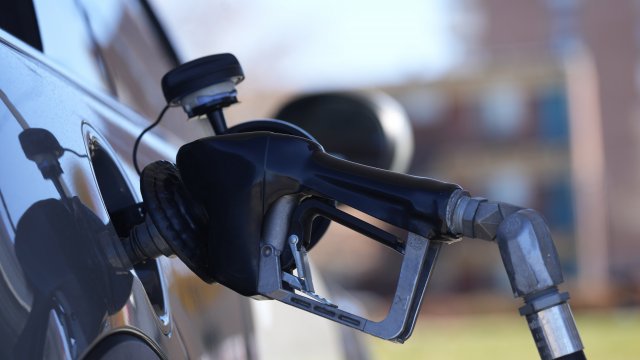 California drivers are shelling out the most for a gallon of gas — $4.63 on average.

"I’m filling only half a tank."

You know this feeling.

"Sometimes I travel to different cities to get the best gas price I can get."

Scouring the earth for a gas price that doesn't feel like highway robbery.

Prices are up coast to coast. AAA says the national average is close to $3.50 a gallon. The lowest price — in Oklahoma — is still north of $3 a gallon.

California drivers are shelling out the highest prices — $4.63 a gallon on average. Drivers in cities like L.A. are finding many stations at or above 5 bucks a gallon.

This is not just a gasoline thing. Supply chain bottlenecks demand changes, and inflation is driving up prices all over the map.

"Firms and employers and wholesale and retail stores see that they can charge higher prices and still sell their products, and so we see prices going up," said Baum.

With stimulus money in pockets, Americans are spending, with holidays on the horizon, too.

It's part of the reason the Fed announced last week it's slowing bond purchases. That could open the door to higher short-term interest rates next year — a move aimed at slowing inflation. But Powell says higher interest rates are far from certain.

"We continue to articulate a different and more stringent test for the economic conditions that would need to be met before raising the federal funds rate," said Powell.

It all means that high prices could extend well into next year.

"For the majority of the population, people on fixed incomes, inflation is harmful because it's eroding their purchasing power. Their standard of living will go down," said Baum.