This Group Is Taking On Sexual Violence In The Disability Community 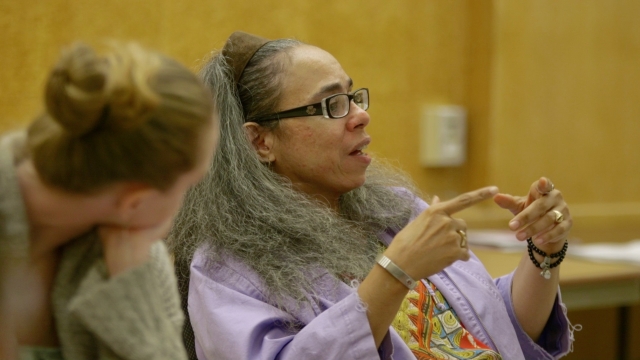 Systems designed to help survivors may be inaccessible for people with disabilities. Illinois Imagines is working to fill in the gaps.

"I was a victim who's now survivor. And I didn't want it to happen to anyone else. … There is a lot of blaming the victim. But in my mind, I felt like ... the only way that I'm going to get past this and be able to move on with my life is to not give my perpetrator the total control over me. I have to be empowered to take the control back in my life."

Cathy Saunders is one of many activists fighting to change a persistent issue: sexual assault and abuse in the disability community.

"One of the biggest barriers is that people with disabilities are not looked at as human beings. … There is still forced sterilization and lack of sexual education towards people with disabilities, simply because they have a disability. So that control of other people, making the decision of whether or not they should have control of their own bodies, knowledge of the parts of their body, the names of them and what they're used for, how they function — that should be basic. We are people first," Saunders said.

Compared to other populations, people with disabilities face sexual assault and abuse more frequently. As reported by NPR, data from the Justice Department shows people with intellectual disabilities are seven times more likely to experience sexual violence than people without disabilities.

But if a person with a disability experiences abuse or assault, there may not always be accessible options for them to report the crime and heal.

"I want us to not be the exception, but just be part of the movement. Not like everything is so disability-orientated, although I'm not ignoring that fact. But I want us to be part of the overall push toward eradicating violence," Saunders said.

This issue inspired the organization Illinois Imagines. That's where we met Saunders.

Illinois Imagines has created resources aimed at closing the gaps in areas where survivors can report, heal and get educated. Those include guidance for the medical community; a step-by-step guide that lets survivors with disabilities know what to expect if they get a rape kit done; guidelines for rape crisis centers; and parent or guardian resources.

Linda Sandman, a disability advocate and expert, said: "When I do trainings about this, I often ask, 'Why is it so hard for us to address the issue of sexuality in the disability community?' And the first thing that people always say is because people with disabilities aren't seen as a sexual beings. … They are infantilized, in the way that they're taught to, in the way that they're treated, and in terms of the access they have to information. Those kinds of attitudes, I think that's one of the big barriers. I think that out of a lot of compassion that people in the community have for people with disabilities also arises a strong sense of overprotection. ... What happens is, there are many restrictions upon really just the daily living for people with disabilities."

This event is just one of the outreach methods Illinois Imagines has deployed.

"Rather than trying to create a whole new system to address the issue of sexual violence, the disability community really looked at who are the experts in this area, and that's the rape crisis centers. … So it was natural to kind of reach out to them and form that partnership. But what we found is that the rape crisis centers, while they were very willing, found that they also face their own systemic barriers — they really didn't always feel that they were accessible or that they necessarily were confident and how they could provide services in the best practice way," Sandman said.

We went to a rape crisis center that's working toward being more accessible for people with a variety of disabilities.

"All rape crisis centers in Illinois offer the same services. So you'll get a 24-hour hotline in your area that provides crisis intervention and information referral, you're going to get counseling that's free of charge, individual, group, and also non-offending significant others. There's also medical and legal advocacy. So medical advocacy, the way that works is medical advocates are present in the emergency room with the victims. I'm going through the process of the rape kit. And any of, you know, the whole process of of of when you're there, and then providing services afterwards. And then we have legal advocacy that will help them through the criminal or civil cases that they want to pursue. We also, at the YWCA, we also offer case management to survivors."

Anacany Barrera has been involved with Illinois Imagines for the past five years, since she started her position as coordinator of the YWCA Chicago rape crisis call center.

"What would you like to see in the future for this space, especially?" Newsy's Melissa Prax asked. Barrera answered: "For the hotline, I would like to see it go digital. And so right now we're unable to offer crisis intervention through text, and I think that's kind of the future of where we want to take a lot of some of the services that we provide, that we can do in formats that anyone can do. And so ... I think one of the next things that we're looking for is just funding and partners to be able to grow the technology to make it more accessible."

Data from The Illinois Coalition Against Sexual Assault shows that the number of survivors with disabilities who were assisted by rape crisis centers more than tripled from 2008 to 2017.

But Barrera says there's more work to be done from the rape crisis center perspective.

A federally funded project from the Vera Institute of Justice created a specific set of measurements to ensure rape crisis centers are accessible. For example, one indicator seeks to ensure centers prioritize violence against people with disabilities and deaf individuals. The report lists several ways to do this: