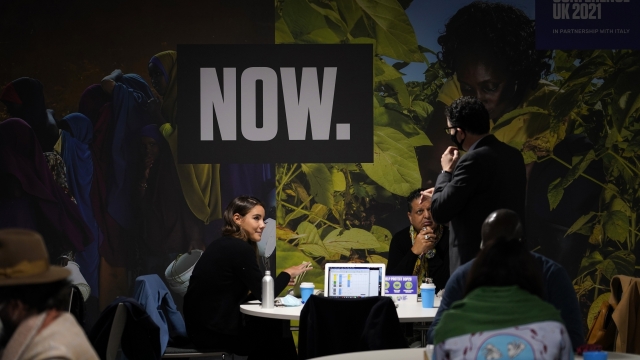 One technology is an air bubble that promotes the growth of algae, which are organisms that eat carbon dioxide.

Away from the climate protests and the delegate discussions, COP26 in Glasgow is also a stage for scientists to showcase their inventions.

At the conference's green zone, what looks like a bouncy castle also purifies the air. As children bounce — the air bubble promotes the growth of algae, which are organisms that eat carbon dioxide. A technology that, its creators believe, can transform our cities.

"We've learned that the algae takes carbon dioxide and it puts out clean air," one child said.

The question is whether the air bubble will really make a difference.

"Well the microalgae, which are the core active principles of this technology, are among the oldest organisms on Earth. They have participated in creating the original atmosphere of our world," co-founder of EcoLogicStudio Marco Poletto said. "In the billions of years of evolution, they have matured an incredible efficiency. So they are actually the organism that can most effectively eat up and remetabolize carbon dioxide, as well as other pollutants in the air."

In the plenary, young people have the opportunity to demonstrate their inventions to a prince — the conference playing host to philanthropists and nonprofit groups.

The blue zone is a part of the conference that everyone can access away from those closed-door events. It's an opportunity for countries and companies to demonstrate what they're doing to innovate in the battle to tackle climate change — it isn't so much fun, but it is interesting.

"There's a sense of real urgency but also excitement that maybe we're going to get some really good announcements and a lot of exchange of information technology and ideas, which is exactly what we want at an event like this," energy and cybersecurity consultant Amber Rudd said.

A serious climate summit with an atmosphere designed to promote progress.