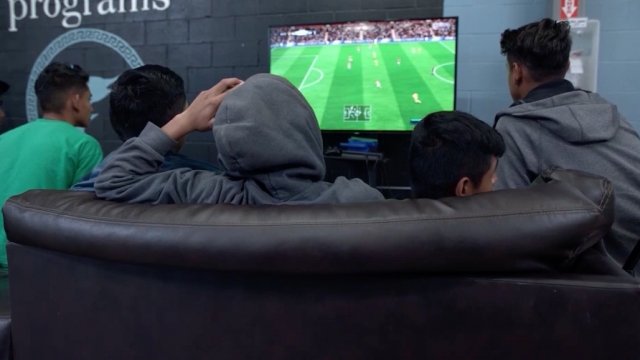 The boys at Casa Padre either crossed into the U.S. unaccompanied or were separated from their families at the border, according to federal officials.

There are nearly 1,500 boys age 10-17 housed inside the largest licensed migrant children's center in the U.S. It's called Casa Padre, and it's a 250,000-square-foot former Walmart located in Brownsville, Texas.

The boys who live there either crossed into the U.S. unaccompanied or were separated from their families at the border, according to federal officials.

During a recent media tour, the conditions inside appeared to be clean but crowded. There's a medical exam room, some phone booths, a cafeteria and a few murals, including one of President Donald Trump.

Every day, the boys spend more than 20 hours inside the center and are allowed outside for at least two hours for exercise.

The U.S. Office of Refugee Resettlement says as of Wednesday, it's holding more than 11,000 children at about 100 shelters in 17 states.

Some additional reporting for this story provided by Newsy's affiliate CNN.