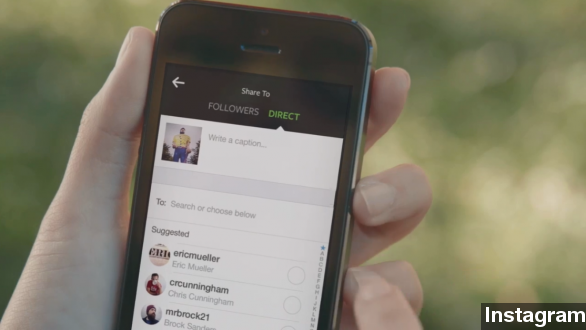 Instagram Direct enables private photo and video messages between specific followers. It's like Snapchat, minus the temporary quality of the messages.

The update adds a new sharing option to select specific followers to receive the message and a tool to monitor who among the direct recipients has opened the message. The rest of the process is plain old Instagram: Share media, add captions and trade comments.

If this sounds a lot like another popular messaging service, that's because it is, sort of. Ars Technica literally sums it up:

So the new feature only marks a slight differentiation from its competition. But as Om Malik wrote on GigaOM earlier this year, it's a sensible move for Instagram.

"Instagram might have started out as a photographer's platform, but it has since evolved into something that creates social connections between people and has led to an entirely different kind of social graph. Photos can lead to connections and connections lead to communication."

Whether this will lead to mission creep remains to be seen. The Verge writes Instagram could be looking to keep its users, even if that means diversifying away from its core functions a bit.

"The company has seen apps like [WhatsApp and Snapchat] eat away at the attention spans of its users. Snapchat lets users share disappearing photos, unlike Instagram, but if it in some ways fulfills the same utility as Instagram — sharing moments with family and friends — it becomes a threat."

And it's worth pointing out Instagram has successfully borrowed features from other apps before — Twitter's Vine came before Instagram Video, for example, and Instagram adopted the format without much trouble.

In evidence: 150 million-plus monthly users — more than Instagram has ever had before. Instagram Direct will roll out to all of them today via the App Store and Google Play.