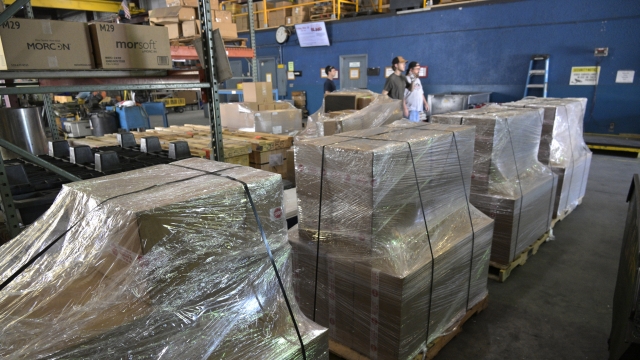 U.S. officials fear weapons sent to Ukraine could fall into the wrong hands.

Before the U.S. sent Ukraine the first pallet of what would become about $8 billion in weapons and military equipment, officials had high-level discussions about whether these arms could fall into the wrong hands. Three government sources familiar with the transfers now tell Newsy that although they support Ukraine's defense, that fear remains.

One source said U.S. officials calculated that Ukraine needs the weapons so urgently, it reduces the risk of stockpiles being misused. But analyst Elias Yousif says weapons tend to outlive wars, even long ones.

Yousif is a conventional defense research analyst at Stimson Center.

"The real concern may be when the conflict comes to an end, which eventually it will, and when the demand by the Ukrainians diminishes, it may increase the incentive to find alternative markets for these systems," Yousif said.

Analysts worry that bad actors, like terrorists, could acquire anything from portable, anti-aircraft Stinger missiles to small arms, which are harder to track. Just last month, a Homeland Security bulletin warned that a pro-al-Qaida magazine was encouraging followers to travel to Ukraine "for training and weapons to use in attacks against the West."

Ukraine's Defense Minister Oleksii Reznikov says that some weapons have GPS trackers, which a source in the intelligence community confirmed, and that the country is using a NATO logistics system to monitor weapons.

"This process was already underway but we are happy to expand and increase its tempo to ensure the comfort of our partners," said Reznikov.

Ukraine has erected a temporary special commission to keep track of weapons and equipment.

But Jonah Leff, director of operations at Conflict Armament Research, which traces the movements of illicit arms, says that's not enough.

NEWSY'S SASHA INGBER: Ukraine's special commission to monitor these weapons is supposed to last for about a year. Is that enough time?

JONAH LEFF: A year is quite a short time for any monitoring of weapons, especially those that are so valued. The proliferation or diversion of weapons can take place any time after a conflict ends. So it's important that any group that's assembled to ensure proper management of weapons continues that work really indefinitely.

President Zelenskyy last week began a campaign against treason and collaboration with Russia.

Iain Overton says the risk of smuggled weapons would come from potentially corrupt Ukrainians and entrepreneurial Russians. He's the executive director of Action on Armed Violence, an organization that investigates its causes. And he spoke about what happened to Russian weapons in the port city of Odessa, a year after Russia first invaded Ukraine in 2014: "There I began to investigate a port called Oktyabrsk, which was run at the time by a former Soviet naval commander, had links to cronies, associates of President Putin. And it seemed that weaponry systems, even in the height of this proxy war with Russia, were still coming through Ukraine on trains, arriving to Oktyabrsk and then being pushed out from there in naval ships down to places like Syria and other locations in Africa and South America."

He says Russia has something to gain, if Western weapons enter the black market and then surface in attacks outside of Ukraine. "The Russian state itself, fighting a disinformation war, may seek to place weapons seized from the Ukrainian forces, perhaps donated by NATO, and these may be sold on in order to create the propaganda of the deed. Because if a NATO donated weaponry system was found to have been used in, let's say, Nairobi by Salafist jihadists to take down an airline jet, then that would be a not only an act of terrible terror, but it would be a profound propaganda coup for the Russian state who would point all fingers of culpability at Ukraine," Overton said.

The country before the Zelenskyy administration had already been a nexus of the illicit arms trade.

INGBER: Is there historical precedent here?

ELIAS YOUSIF: Ukraine kept a large arsenal of Soviet era equipment up through the 1990s, and with the collapse of the Soviet Union and the economic crisis that followed. It gave the opportunity for criminal entrepreneurs to co-opt that stockpile. And as much as $30 billion worth of Soviet equipment was lost over many years in Ukraine.

The Russians are currently using American and European components on the battlefield in Ukraine.

LEFF: We were not expecting to see so many components from all over the world, in all of their weapons systems, including communication devices, other counter-UAV equipment, cruise missiles, drones.

INGBER: So this was before the U.S. imposed sanctions for the war in Ukraine. This isn't, say, a get-around to the production issues that manufacturers in Russia are having to try to keep up with the demand. Is that what you're saying?

LEFF: Some of these components were manufactured before and some after.

INGBER: Can you give me an example of a U.S. component?

LEFF: I'm not able to discuss company names at this point. I can say that we've seen several semiconductors, electronics, guidance systems. Their use as weapons does constitute a violation of sanctions for some of these countries.