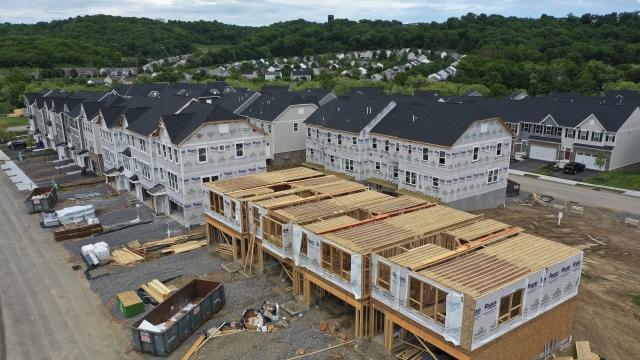 Investors brace for another big interest rate increase this week from the Federal Reserve. The hikes are having an effect on homebuyers.

Another interest rate hike is approaching to temper inflation, but it's flaring tempers for some who are afraid the dream of a big purchase is getting too expensive.

"I would die to be a homeowner," said Heather Blanchet, who's looking for a home.

Another three quarters of a percentage point higher interest means the standard borrowing rate to buy homes, cars and put money on a credit card is climbing.

That's straining people like Blanchet, who's staring down increasing monthly payments on her would-be mortgage.

"Getting a loan, I feel like, is increasingly hard, interest rates are crazy," said Blanchet.

But that's exactly the point for the Federal Reserve, which is trying to lower white-hot demand not just for homes, but for everything.

"It's not quite a buyer's market yet, but it's balancing out," said Joy Dysart, a real estate agent.

In the housing market it's helping to balance the scales. While it could make a mortgage more expensive for now, it's also leaving sellers with fewer interested buyers and less power in the deal.

"I think we are now entering a market where sellers are working with buyers and that's great when people are negotiating again," said Kelly Fogul, a mortgage broker.

Garrett and Marisa Severen know how tough it's been for buyers. They bought a house earlier this year in cash, something they tried to avoid.

"We probably had four houses that we really fell in love with that we lost because we didn't do cash offers," said Garrett Severen.

And the number of homes being bought with cash is still above pre-pandemic levels.

Redfin recently found more than 31% of homes are selling with all-cash offers.

"A lot of the 'cash buyers' are people who are high net worth individuals who have leveraged their portfolio of assets, so they've taken a line of credit," said Holly Meyes Lucus, a real estate agent.

Still, the cooling market can be good news for people needing a mortgage, like Alexis Sande and her fiance. They just bought a new home in Florida and had a much easier time of it than they would have just months before.

"This house had been on the market for about five days. With the interest rates going up, we didn't have to get into a bidding war with anybody or offer more money for the home or anything like that," said Sande.

Still, plenty will feel the pinch of a higher rate.

And many like Zach Van Emmerick are counting on their lucky stars they bought a home when they did.