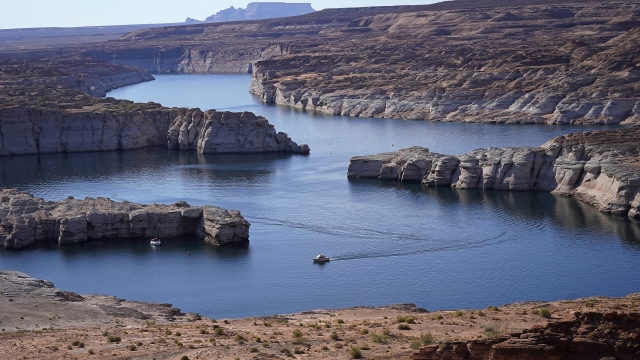 The Colorado River supplies water to tens of million of people, but restrictions will reduce many western states' supply.

In the West, drying lakebeds and shrinking rivers are reaching a breaking point. Now the Department of the Interior is slashing water supplies to several western states, as the Colorado River shrinks and the vital Lakes Powell and Mead which it feeds get lower and lower.

“I wish I had a crystal ball for what will happen in the Colorado River basin," said Simone Kjolsrud, water resource adviser to Chandler, Arizona. "When you live in the desert you have to have that conservation ethic of embracing that desert lifestyle."

In Arizona, cities are now planning around a coming cut of 21% of the state’s original water allocation.

Part of a package of cuts was announced Tuesday. That also includes slashes to supply for Nevada and parts of Mexico.

"We have known for decades that there’s a real possibility that our water supplies would be cut, and so for the most part the cities have planned very proactively," said Kathryn Sorensen, researcher at ASU Kyl Center for Water Policy.

Cities near Phoenix are now contending with some of the steepest cuts in the West, amid some of the most dire water conservation efforts ever.

The Interior Department is now looking to save some 2 to 4 million acre feet of water over the next four years under the right conservation conditions. One acre foot can supply three houses for a year.

"We have invested in infrastructure," Kjolsrud said. "We’ve been storing water underground that we can access during times of surface water shortages. We’re not anticipating that in the next few years.”

Still, the cuts aren’t good news for the millions who rely on the Colorado River and the $15 billion agricultural industry.

"If we got some good rains in here that would go ahead and green up," said Nancy Caywood, an Arizona farmer.

Lately, Caywood hasn't been doing much farming, though it's her job.

She's giving tours of her land instead to make up for the money she’s losing – without any crops to sell.

"I drive around, and I look at empty canals," Caywood said. "Literally I burst into tears over it a couple of times because I'm thinking it's just such a hopeless situation."

At a nearby farm, her son is leasing land to supplement income.

"I don’t know if there's going to be enough water to keep going, if he’s gonna run out, with his allocation," Caywood said.

Arizona is the hardest hit of the southwestern states that rely on the emptying Colorado River. Seven states — Wyoming, Colorado, Utah, New Mexico, Arizona, Nevada and California — were told to come up with a plan to cut their overall water use by 15% next year.

"We will lose 10% of our water supply by 2040," California Democrat Gov. Gavin Newsom said.

California has no cuts under the plan, but it’s not lost on Gov. Newsom that the state still faces a dwindling water supply. He just unveiled a plan to invest billions in water recycling, storage and desalination.

The cuts announced Tuesday are just a teaser of what could be ahead, as the Interior Department looks to save far more water coming from the critical Colorado River.