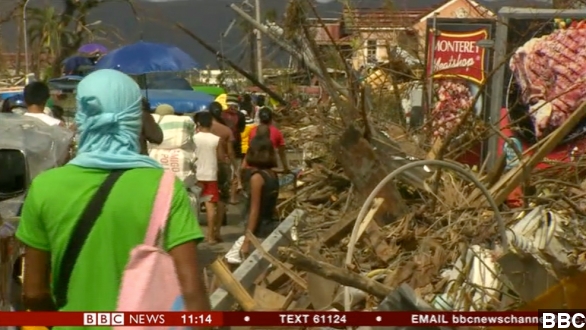 The U.S., Australia, United Kingdom and United Nations have sent millions of dollars in aid to the Philippines.

Governments from across the globe are sending ships and supplies toward the Philippines Monday, as the nation begins to recover from one of the worst recorded storms in human history.

As many as 10,000 people are feared dead, perhaps the majority of those in the city of Tacloban. The United Nations immediately sent $2 million in aid and food, while the U.S. pledged manpower. (Via BBC)

“A lot of U.S. Military planes and also ships are being used in a massive relief operation now.” (Via Fox News)

President Obama’s administration has dispatched five warships and their crews to the Philippines to help rescue and relief efforts. That’s along with $20 million in aid. (Via Euronews)

Australia is giving $10 million for relief, and the United Kingdom: $9.5 million. Neighboring China has also pitched in, though not without some criticism.

China and the Philippines are military and economic rivals, so China’s relatively small $100,000 donation prompted headlines like this one from Slate.

Granted, China had its own cleanup efforts as well, as the downgraded tropical storm tore through southern parts of the country after hitting the Philippines. (Via Google)

On top of the death toll, tens of thousands in the Philippines have been left homeless, with entire cities flattened by Typhoon Haiyan. (Via CBS)

There are several options for online donation to Philippines recovery efforts. Among them: unicef.org/support, redcross.org.ph, and americares.org.