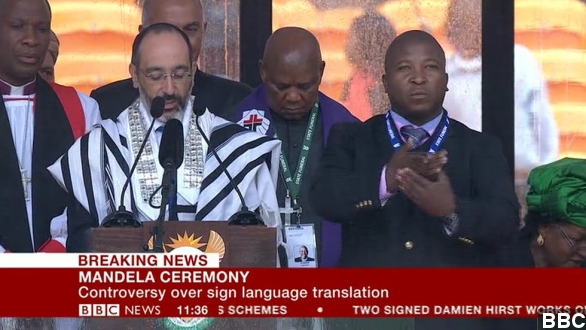 The sign language interpreter seen at the memorial service for Nelson Mandela Tuesday is being called a fake.

Some are calling the sign language interpreter seen at the memorial service for Nelson Mandela Tuesday a fake.

"The national director of the Deaf Federation of South Africa says the man that you see wasn't signing in South African or American sign language." (Via WBFF)

The unidentified man who stood next to the likes of President Barack Obama and other world leaders as they mourned the loss of the former South African president was seen on broadcasts around the world. (Via BBC)

But it wasn't until accusations like this one from Wilma Newhoudt, a deaf member of South Africa's Parliament, and this one from Bruno Druchen, the national director of the Deaf Federation of South Africa himself, began surfacing on Twitter that people became suspicious of the so-called interpreter. (Via Twitter / @newhoudt, / @BrunoDruchen)

Australian outlet SBS World News was among the first media outlets to raise the question. Braam Jordaan, a deaf South African and board member for the World Federation of the Deaf, told the news site:

"I was really upset and humiliated. He made up his own signs. What happened at the memorial service is [a] truly disgraceful thing to see — it should not happen at all. What happened today will be forever aligned with Nelson Mandela [and the] Deaf Community, thanks to this fake interpreter."

South Africa's government says it's preparing to give a statement on the accusations. But it's unclear how the alleged imposter got on stage in the first place or why he was allowed to stay for the entire service.

Still, multiple sign language experts who saw the broadcast agree the man wasn't signing anything at all. As one expert put it, he was just "flapping his arms around." (Via New York Daily News)

And even more fishy — several sign language experts have reportedly tried to identify the interpreter with accredited interpreter organizations but haven't been able to do so.

Correction: A previous version of this video referred to the World Federation of the Deaf as the World Deaf Federation. This video has been updated.