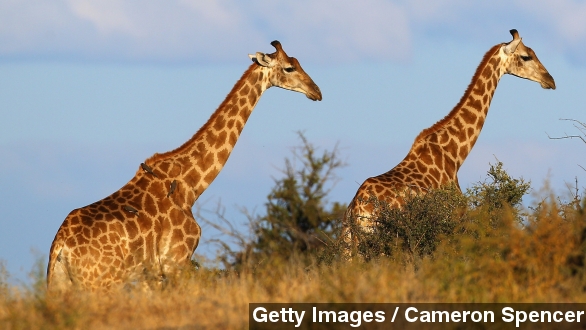 The Giraffe Conservation Foundation says there were 140,000 giraffes 15 years ago. Now, their numbers are down to 80,000.

A decline of 40% in the last 15 years and on the brink of extinction.

That's the way things are looking for the world's tallest animal, the giraffe, according to Giraffe Conservation Foundation. 15 years ago, 140,000 giraffes roamed Africa the group says. Now, their numbers are down to just 80,000.

There's currently nine subspecies of the giraffe. The GCF says six of those nine are decreasing and/or unstable and two, the Rothschild giraffe and the West African giraffe are officially listed as endangered.

The foundation says the main reason for such a steep decline is mainly from a loss of habitat and poaching.

But unlike elephants and rhinos being poached for their tusks or horns, giraffes are often poached for a different reason — their meat.

UK outlet The Week writes, "Giraffe meat is said to be sweet and is popular among locals. Some traditional healers even tout giraffe meat – particularly the bone marrow and brains – as a cure for HIV/Aids, fueling the illegal trade."

Speaking to ABC, executive director of the GCF Julien Fennessy called it a "silent extinction" and the outlet, quoting another giraffe conservation expert, reports killing giraffes is easier than killing other animals and provides more meat for the effort.

Efforts are underway to help protect the giraffes and the Association to Safeguard Giraffes in Niger has reported increasing numbers of West African giraffes in the area in recent years.

Fennessy says giraffe conservation groups don't get as big of a budget as groups protecting elephants and rhinos. He's hopeful, with enough early action, the giraffe population will be able to rebound.