North Korea Is Officially Headed To The 2018 Winter Olympics 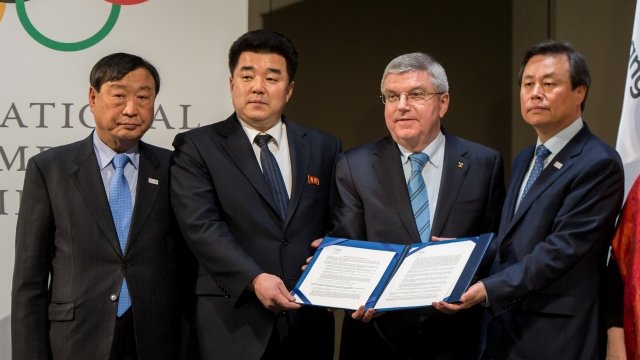 It's official: Athletes from North Korea will compete in the upcoming 2018 Winter Olympics in Pyeongchang, South Korea.

On Saturday, the International Olympic Committee gave the OK for the North to send to the games 22 athletes, 24 officials and 21 media personnel.

And for the first time, North and South Korea will have a joint team competing in the Olympics — a women's ice hockey team, which will be represented by a unified Korean flag.

The IOC also approved the Koreas marching together at the opening ceremony under that unified flag. The two countries had already agreed on all of the terms but needed committee approval.

IOC President Thomas Bach commended the countries' ability to come to an agreement.

"The Olympic Games are always about building bridges. They never erect walls," Bach said. "The Olympic Winter Games Pyeongchang 2018 are hopefully opening the door to a brighter future on the Korean peninsula."