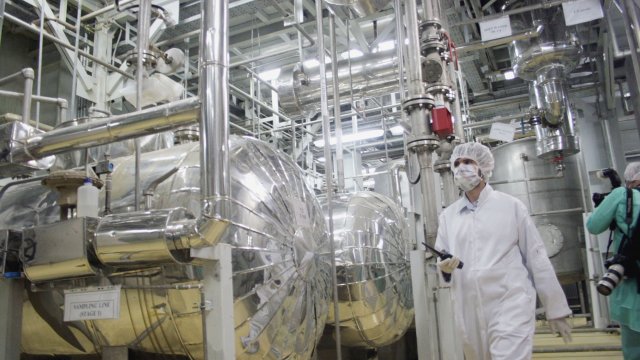 Iran's latest move leaves the country with almost no international constraints on its nuclear program.

The international deal constraining Iran's nuclear program is still technically in effect — but it's been rendered almost entirely irrelevant by Iran's latest departure from the agreement.

Iran announced Sunday it would abandon the final restriction on how many uranium-refining centrifuges its program can operate. The country previously said it will no longer follow limits on how much uranium it can produce and enrich.

However, Iran is still allowing international inspectors increased access to its nuclear sites, which means the world will at least be able to keep a closer eye on the country's nuclear activities.

Iran also said it's willing to return to its commitments if U.S. sanctions against Iran are lifted — but that seems like a remote prospect. The U.S. left the agreement in 2018 and hasn't shown much interest in reopening it. And the killing of Iranian general Qasem Soleimani has escalated tensions between the two countries

The deal's remaining participants aren't ready to abandon it just yet: the European Union's main foreign representative said getting back to full compliance with the agreement was "now more important than ever" after Iran's announcement.

Iran's noncompliance with the deal doesn't mean it'll be able to acquire a nuclear weapon right away. The country is still just under a year's worth of work away from acquiring enough nuclear material to build a bomb.

Back in November, the United Nations' nuclear inspection agency reported Iran has a stockpile of uranium enriched to just shy of 5 percent. Before the nuclear deal went into place, Iran had stores of 20 percent enriched uranium: very close to the level needed to build a bomb.