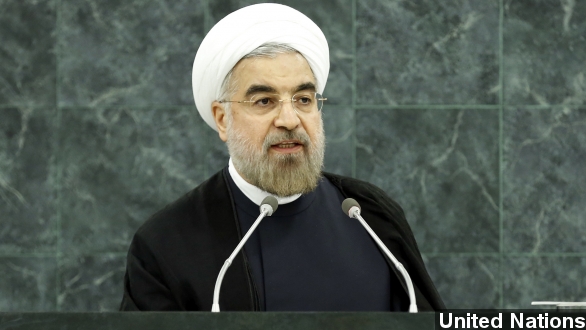 The expected invitation comes only a day after Iran's foreign minister announced some construction work would continue at the site.

When it comes to historic agreements, mixed messages probably aren't the best way to make everyone feel comfortable. Still, Iran has invited inspectors to visit its Arak nuclear reactor site.

The International Atomic Energy Agency — or IAEA — announced the expected invitation Thursday after a closed-door meeting. (Via Press TV)

The heavy water plant southeast of the capital of Tehran has been a contentious site because of its potential to produce plutonium for use in a nuclear bomb. (Via KTBC)

Arak was also a key factor in negotiations that ended over the weekend in Geneva with an international agreement to limit nuclear production and ease economic sanctions against Iran. (Via BBC)

"Iran also will stop most of its work at a place called Arak. A-R-A-K ... If completed, it could yield plutonium in its spent fuel, and Iran has basically agreed to pause on this as well for six months." (Via C-SPAN)

Reaction to that announcement came swiftly. A U.S. State Department official said road or building work might be allowable, but fuel production and other advances must stop. (Via Times of Israel)

Arutz Sheva reported the French Foreign Ministry quickly said, "The interim agreement specifically mentions the cessation of activity at the Arak nuclear facility. The text of the agreement clearly delineates the matter, and we call upon Iran to live up to it."

The agreement drew plenty of sketpicism with the BBC reporting Israel, Saudi Arabia and most of Iran's Arab neighbors are still worried the country will eventually be able to produce a nuclear weapon.