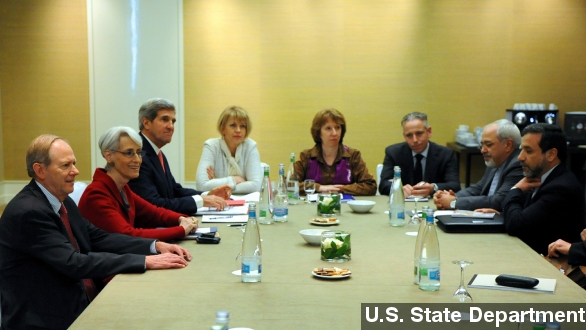 After three long days, negotiations over Iran’s controversial nuclear program have wrapped up with no deal — though the key players remain hopeful.

After three long days, negotiations over Iran’s controversial nuclear program have wrapped up with no deal — though the key players remain hopeful.

“We came to Geneva to narrow the differences, and I can tell you without any exaggeration we not only narrowed differences and clarified those that remain …” (Via CNN)

World leaders had expressed optimism the talks might produce some sort of deal. And it would be historic — no such agreement between the two sides had been reached in more than a decade. (Via BBC)

Iran has said all along it uses its nuclear stockpile for purely peaceful purposes and has no intention of making nuclear weapons — but the U.S. and its allies have remained highly skeptical. (Via ITN )

Broadly speaking, a deal would likely involve Iran scaling back some of its uranium enrichment and reducing its existing stockpiles — this, in exchange for modest relief from harsh international sanctions.

The first round of talks broke down when France objected to the initial deal on the table to freeze Iran’s nuclear program for six months — saying it didn’t go far enough to curb the nation's nuclear ambitions. (Via Fox News)

Why the skepticism from France? The Financial Times writes, “Some diplomats suggested that France might be playing “bad cop” to the U.S. “good cop” in a bid to extract final concessions from Iran.”

Whatever the reason, despite no agreement, several negotiators say they can seal a deal in the future.

But a writer for Al Jazeera isn’t so sure, saying: “The longer the delay now that the parties have put their cards on the table, the more time opponents of rapprochement with Iran will have to undercut prospects for success by demanding tougher terms.”

Opponents that include Israel, Saudi Arabia and some members of Congress. Negotiators are due to meet again in ten days time for another round of high level talks — leaving the door open for hawks on Iran to lobby for more sanctions in the meantime.