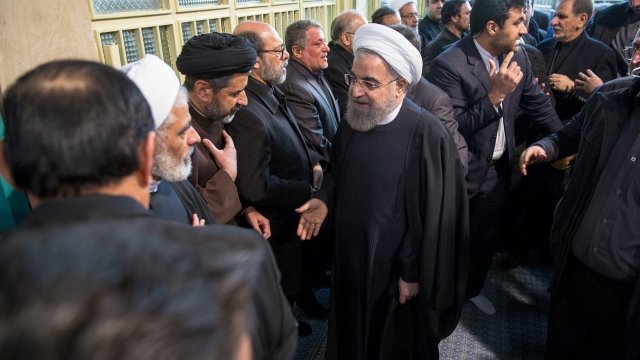 Iranian President Hassan Rouhani said the country "will not remain silent about America's repeated violations" of the 2015 nuclear deal.

Iran's president is accusing the U.S. of undermining the 2015 nuclear agreement.

During the inauguration ceremony for his second term, Iranian President Hassan Rouhani said: "The actions of the U.S. regarding the implementation [of the deal] show that the U.S. can't be trusted." He went on to say: "Iran will not be the first to pull out of the nuclear deal, but it will not remain silent about America's repeated violations."

Rouhani also said Iran wanted nothing to do with "newcomers to the political arena." That's likely a reference to President Donald Trump, who last week signed into law new sanctions against Iran, along with North Korea and Russia.

Trump Is About To Take A 17-Day Vacation; Let's Put That Into Context

While Donald Trump's 17-day vacation is certainly his longest yet, it's only the latest of his many trips outside the White House.

Those sanctions, plus sanctions announced last month against Iran, are responses to the country's missile program, its alleged support for regional terrorists groups and militias, and accusations that it has committed human rights violations.

The U.S. also just recertified the 2015 nuclear deal, which lifted many international sanctions against Iran on the condition that it dial down its nuclear program. The Trump team has criticized the agreement as being only focused on Iran's nuclear proliferation.

The EU's foreign policy chief emphasized the bloc's "unwavering commitment to the deal."