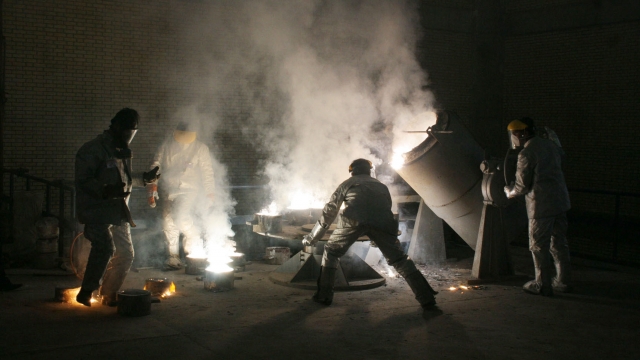 Now Iran has given European signatories another 60 days before it steps further away from the 2015 nuclear deal.

The centrifuges were banned under the 2015 Iran nuclear deal with the U.S., U.K., France, Germany, China and Russia. In exchange, the U.S. and the EU were to lift sanctions on oil and other trade and banking systems. But the Trump administration withdrew from the deal last year. Since then, the U.S. has gradually reimposed sanctions on Iran, which hit the country's economy hard.

European nations are still in the deal, but Iran began rolling back its commitments to the agreement in May. It's vowed to continue incremental steps away from the deal until it gets better terms to offset U.S. sanctions.

In July, Iran enriched uranium beyond the agreed-upon levels. But the new enrichment levels were nowhere near what's necessary to produce a nuclear weapon. Now, with forty of these advanced centrifuges, Iran can quickly increase uranium enrichment to levels capable of producing a weapon.

But Iran insists it isn't planning to make a nuclear weapon. A spokesman said that the move can be reversed, if the European countries comply with Iran's ultimatum. Iranian President Hassan Rouhani gave Europe another 60 days on Wednesday to come up with a way to salvage the nuclear deal or risk Iran violating another one of its commitments.