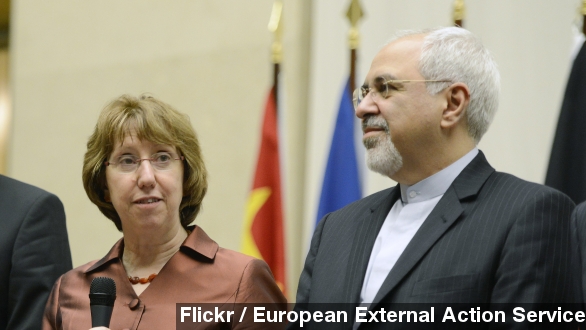 Talks over Iran's nuclear program hit a snag this week after tightening U.S. sanctions drove Iranian diplomats away from the negotiating table.

Both sides are currently working to expand the six-month interim deal finalized in Geneva last month, which restricts Iran's uranium enrichment in exchange for some sanctions relief. (Via BBC)

The Obama administration pledged to avoid enacting new sanctions while the deal is in effect. But Treasury Secretary Jack Lew told Congress the U.S. doesn't intend to abandon its existing sanctions.

"Even as we explore the possibility of a long-term agreement with Iran that would provide verifiable assurance that Iran cannot obtain a nuclear weapon, we will continue to enforce our sanctions vigorously." (Via C-SPAN)

The Treasury Department announced Thursday it is freezing the assets and banning the transactions of several oil and shipping firms suspected of helping Iran evade sanctions. (Via The Washington Post)

The move temporarily disrupted ongoing nuclear talks in Vienna after Iranian diplomats accused the U.S. of going against the spirit of the Geneva agreement. (Via Euronews)

But despite the snub, Iran's Foreign Minister Mohammad Javad Zarif told CBS Sunday he is still ready to negotiate.

"We are committed to the implementation of the plan of action that we adopted in Geneva. But we believe that it takes two to tango. ... The process has been derailed; the process has not died."

The White House has asked Congress to delay a bill currently circulating the House that would create more sanctions with Iran.