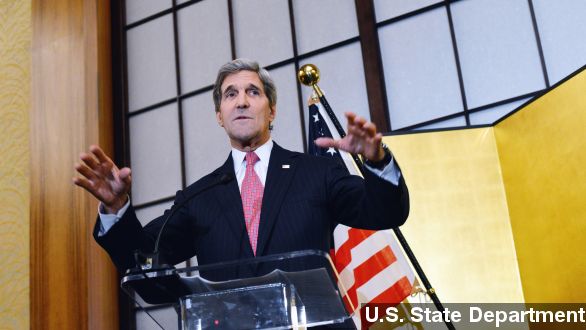 Negotiators from the U.S. and five other world powers inch closer to what could be a historic deal on Iran’s nuclear program.

All eyes are on Geneva Wednesday as negotiators from the U.S. and five other world powers inch closer to what could be a historic deal on Iran’s nuclear program.

On the eve of the talks, Iran’s Foreign Minister Javad Zarif took to YouTube with this message for the West: "Nuclear energy is not about joining a club or threatening others." (Via YouTube / javadzarif )

His words might have fallen on deaf ears. The West has long suspected Iran's uranium enrichment is meant for developing nuclear weapons. Iran says its nuclear program is used for peaceful purposes only. (Via ITN)

This second round of talks comes ten days after negotiators last met and failed to walk away with a deal. And this time, some major differences still remain.

Of concern to the international community is Iran’s Arak heavy water plant that can produce plutonium, and also its existing stockpiles of enriched uranium. Still, there are some signs of progress. (Via Wikimedia Commons / Nanking2012)

“They have come back. They wouldn’t if they thought the talks would be a complete failure. There is still a sense of cautious optimism in Geneva that they can finally get ink on paper.”  (Via Al Jazeera)

Another sticking point: sanctions. The Obama administration argues that's what brought Iran to the table in the first place but a rollback in some sanctions is necessary to get Iran to concede anything.

OBAMA: ​"Let’s look, let’s test the proposition that over the next six months we can resolve this in a diplomatic fashion." (Via The Wall Street Journal)

But Obama is being pressed for a tougher deal by members of Congress who are concerned the U.S. is going too easy on Iran .

“An agreement for the sake of an agreement would in my view be a disaster.” (Via Voice of America)

Their view is shared by Israel, Saudi Arabia and several other U.S. allies in the Middle East who fear a deal that allows Iran to keep any of its nuclear program puts their own security at risk.

On the heels of a trip to France, Israeli Prime Minister Benjamin Netanyahu arrived in Moscow Wednesday to urge Russian leaders to hold out for a better deal.

“Iran’s dream deal is the world’s nightmare.” (Via CNN)

Following a meeting at the White House Tuesday, Senate leaders agreed to hold off on voting on another round of sanctions until after the talks conclude.