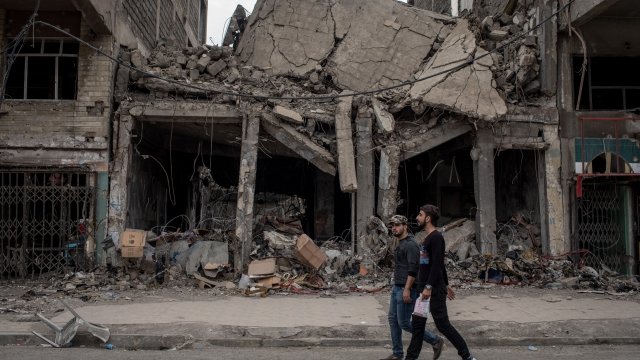 Iraq is requesting a little over $88 billion to rebuild parts of the country seized by ISIS.

Iraq declared victory over ISIS in December. Now, it's seeking over $88 billion to rebuild parts of the country seized by the militant group.

Outlets report allies made pledges worth $30 billion at a donor conference in Kuwait this week. Several of Iraq's neighbors promised billions in credit, loans and other investments.

But that's still tens of billions of dollars short of what Iraq is requesting.

US Reportedly Starts Withdrawing Troops From Iraq After ISIS Defeat

A spokesperson for the Iraqi government told the Associated Press and Reuters the drawdown is still in early stages.

The U.S. didn't offer direct assistance to Iraq at the gathering but reportedly plans to provide over $3 billion in loans and other aid.

The United Nations says an estimated 2.5 million people are still displaced as a result of the conflict against ISIS.