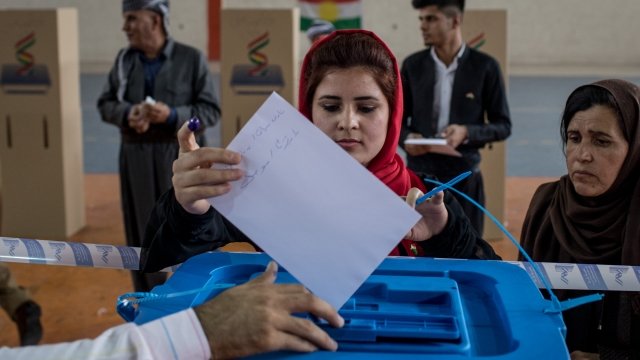 People in Iraqi Kurdistan voted overwhelmingly in favor of seeking independence from Iraq.

The Kurdish people are thought to be the largest ethnic group without its own country. Over 92 percent of voters approved an independence referendum that took place Monday in the autonomous region of northern Iraq currently under de facto control of the Kurdistan Regional Government.

More than 72 percent of eligible voters cast a ballot in the referendum.

US Says It Won't Support Kurdistan's Push For Independence

The U.S. asked the government of Iraq's Kurdistan region to hold off on its push for independence to instead focus on fighting ISIS.

But just because a majority of Iraqi Kurds are in favor of seeking independence, that doesn't mean secession is going to happen right away.

But Kurdish leaders hope the "yes" vote will kick-start those talks with the Iraqi government.

There'll be resistance on Iraq's part, though. On Wednesday, the country's prime minister said he would "never have a dialogue about the referendum" with the Kurdistan Regional Government.