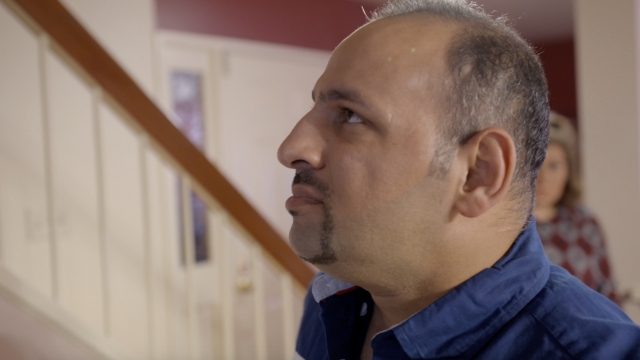 Iraqi translators and their families must apply for U.S. visas as refugees. They have priority access, but the percentage of approvals has been low.

In 2006, Khalid al-Baidhani was running an electronics repair shop in Baghdad when he heard the U.S. Army needed more Iraqi translators.

He signed up, and he chose the nickname "Mark" after Mark Wahlberg, whose movies he loved.

"It wasn't expected to be that dangerous actually," he said. "I didn't hear about real danger there until it was too late for me."

One day that year, he left the military base, carrying food home for his family, when two men pulled up in a car and shot him in the shoulder and in his face, trying to kill him. He says it happened in a second.

He doesn't know who shot him, but he's sure why.

"Everyone was targeting who worked with the United States," his sister, Duaa, said. "There was not anyone in all Iraq, all Baghdad, who was not targeting people like him. Being born and raised in that country and working for them? They feel like that's even worse."

Khalid recovered within a year and then went back to translating for the U.S.

With continuing threats against his family's lives — and with the U.S. military drawing down forces in 2011 — he fled to the United States. He had protection under a special visa program. His sister followed a few years later. But that program expired for Iraqis in 2014. The State Department began allowing Iraqis who worked with the U.S. military to apply as refugees through the Direct Access Program.

"I might be a very dark person to say this, but I feel like it's a matter of time before something happens to them," Duaa said. "My worst would be kidnapped."

Their applications have stalled for nearly a decade. They're not alone. Right now, there's a backlog of more than 100,000 Iraqis who applied through the program after working for the U.S.

"It keeps me wondering: Why is this happening to my family?" Khalid said. "Is something going on or they don't want to bring them?"

That question is one Congress has grappled with for a decade.

"I think it's immoral to leave behind the people who helped our military or who helped aid organizations, our diplomatic missions. It is a stain on our conscience," U.S. Rep. Earl Blumenauer told Newsy in an interview.

In March of this year, Blumenauer and a bipartisan group of 31 lawmakers sent a letter to the State Department and other departments asking for clarification on U.S. policy.

"We are writing to express our concern and need for further information about the slow processing of visas for our Iraqi and Afghan wartime partners," Blumenauer wrote.

They say they didn't get a response.

In a statement to Newsy, the U.S. State Department said approvals dropped last year "due to the need to introduce new security vetting procedures" as required by the president's policy restricting travel from certain countries.

An official told Newsy "security checks take time, but they are critical."

"There's a commitment that we owe to our partners when we ask them to put their lives on the line to work with us in conflict areas when they have to live with the consequences of that commitment" Melissa Dalton, Deputy Director of the CSIS International Security Program, said. "It would not be possible for the United States to achieve its objectives in places like Iraq without working by, with and through local partners."

Khalid is proud of his years working with the U.S. Army.

Because the bullet went through Khalid's face and neck, he still can't hear out of his left ear or close his left eye. He's worried his family will face a similar fate — or worse.

"They will punish them for what we did, and their punishment is death," Duaa said. "We're talking about a 10-year-old little girl and two young boys who are very eager to learn and to work."

The Special Immigrant Visa program is still active for Afghan nationals who worked with the U.S.

As of mid-September, the State Department had admitted 191 Iraqis under the Direct Access Program this year. Khalid and his family hope their loved ones are next.