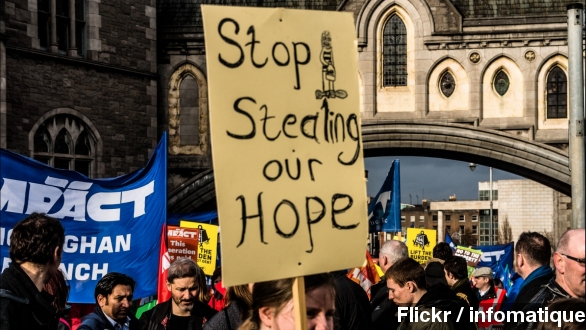 After almost three years, Ireland can exit its emergency fund program, but the country's financial rehabilitation will be tough.

Ireland will be the first eurozone country to step out of its bailout program.

Finance Minister Michael Noonan announced Friday the country will complete its 2010 lending deal this weekend. It amounted to an 85 billion euro emergency loan and included strict saving and spending-reduction agreements. (Via Business Insider)

​"There's a great sense of achievement of having completed a task that I set out to do almost three years ago now." (Via CNBC)

But don't raise a glass quite yet. The mood has been somber for Ireland and those watching. The country's financial rehabilitation will be tough, to say the least.

Ireland's public debts are massive, adding up to 125 percent of its GDP. The country will be paying it off well into the 2030s. (Via Wikimedia Commons / Spitzl)

​FRANK MCDONALD: "I think that people feel a bit battered by everything that happened, obviously. And a lot of people are suffering major levels of financial indebebtedness." (Via CNN)

​The Guardian reports, "The human cost of the downturn has been immense," in more ways than just personal and public debt. Unemployment, for example, peaked at 15 percent and will remain at 13 percent for another year — at least. Here's the Deputy Prime Minister Eamon (EE-mun) Gilmore:

Hundreds of thousands of young people fled Ireland in search of jobs during the crisis, according to the Irish Independent. Country-wide pension cuts and tax hikes left many struggllng. Noonan, though, hails the Irish people.

​NOONAN: "It was an absolute catastrophe, and people made a lot of sacrifices. We admire the people who took the pain and worked their way through it." (Via Sky News)

Skepticism remains, though, with some calling the government a "serial economic delinquent." Officials, however, are making promises to avoid a second bailout.