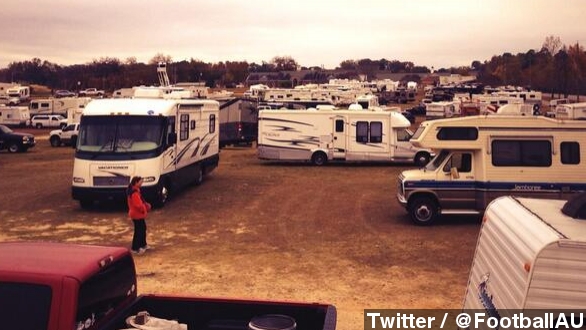 Fans set up tailgates a week in advance for Saturday's Iron Bowl matchup between the undefeated Alabama and Auburn University.

​One of the biggest games of the year is right around the corner, with the Alabama Crimson Tide facing off against the Auburn Tigers in their 77th Iron Bowl Saturday. And fans are ready.

In fact, some of Auburn’s tailgating grounds were opened November 23… one full week before the game. Sound crazy?

“Plans to have their thanksgiving dinner right here next to campus.” (Via WBMA)

And Auburn’s campus opened for tailgating at 6am Friday… for the Saturday afternoon game. (Via Alabama.com)

It might seem a little bit extreme but the matchup it’s shaping up to be one of the most important games of the year.

The state of Alabama has claimed four of the last National Titles, Alabama with three and Auburn with one. Not only could the winner have a shot at the title again this year, but there’s something a little more important on the line. (Via YouTube / Auburn Athletics)

In the BCS Standings, Alabama is ranked number one, while Auburn trails behind at number four thanks to its one loss. As CBS Sports points out... yeah, it’s a pretty big deal. (Via ESPN)

“But this also happens to be the first winner-take-all-for-the-SEC-West Iron Bowl since the SEC's 1992 divisional split ... both teams have legitimate designs on a national championship -- in short, the biggest Iron Bowl since at least 1971.” (Via CBS Sports)

And Forbes is already hailing it the biggest and craziest college football game of the year.

“But understand this. National championship is nice. But champion of Alabama is essential. The Auburn crowd will be insane … It’s the football version of a steel cage match.”