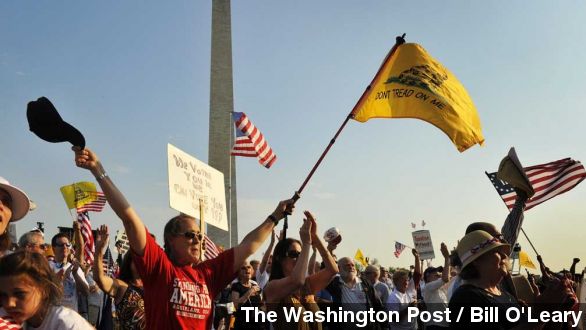 The Obama administration is moving to rein in the use of nonprofits for political purposes.

In you were anywhere near a TV in 2012, you probably remember ads like these.

"Tell him for real job growth stop spending and cut the debt."

The groups behind them — groups like Crossroads GPS and the League of Conservation Voters — could see their ability to influence elections next time around limited, big time.

According to The Wall Street Journal, “The new 'guidance' ... would curtail a broad array of these tax-exempt entities' activities, including campaign advertising, voter registration, get-out-the-vote efforts, and distribution of voter guides and campaign materials."

If you’re wondering the reason for all this, think back to the Supreme Court’s landmark 2010 Citizens United Ruling. That essentially opened the door for some labor unions and corporations to raise and spend as much money as they wanted — and best part, they could keep keep their donors secret. (Via CNN)

NICHOLAS CONFESSORE: "There are donors that don't want their names in the paper, they're afraid of boycotts, they're afraid of being called names. So C4 groups have given those donors — left and right —  a way to spend money, get money in politics." (Via MSNBC)

​In other words, they can spend as much as they want to influence elections, so long as they are independent of candidates. (Via Center for Responsive Politics)

If that sounds a little shady, it’s because it is. That part of the tax code can apply to everyone from a local volunteer fire department or rotary club —

— to the Koch brother's conservative group Americans For Prosperity, which poured tens of millions of dollars into a campaign to defeat President Obama back 2012. All qualify as 501c4s  — so long as they're not telling you who to vote for — at least not directly.

But that’s a standard that’s hard to define, as The Washington Post’s Ezra Klein explains: “Nowhere does the IRS mention 'an organization formed by top political operatives for the clear and obvious purpose of reelecting or defeating the president.' But that's what 501(c)4s have become."

The new rules attempt to further define them by saying “candidate-related political” activity does not promote social welfare. As for how well this can be enforced …

Politico’s Byron Tau and Lauren French say don’t be fooled —  dark money, as it’s known, isn’t going anywhere. “Even if the Obama administration takes an aggressive stance when the final regulations are released, political groups could circumvent the rules by converting into other types of entities not governed by the rules.”

Kim Barker at  ProPublica speculates funneling money through “trade associations like the U.S. Chamber of Commerce will become the vehicle of choice for anonymous money in politics.”

The proposed regulations are seen as a reaction, in part, to the IRS controversy that erupted six months ago. It was revealed then the agency was giving extra scrutiny to some conservative groups seeking tax exempt status. (Via ABC)

The new guidelines aren't yet finalized. There will be a lengthy public comment period first — which means they may not go into effect until after next November’s elections.