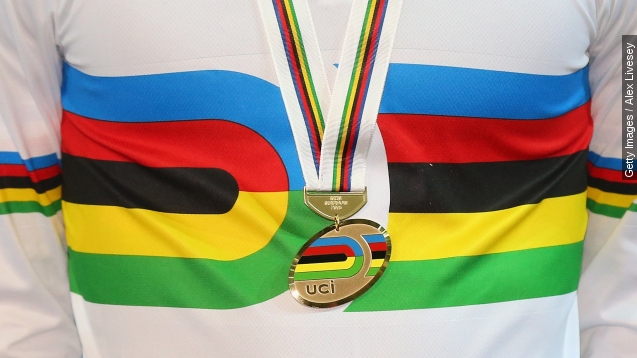 A Swiss scientist studied cycling's "rainbow jersey curse" that seemed to cause champions to struggle after they won a world championship.

American sports fans know all about cups and pennants and trophies, but in the cycling world, when riders win a world championship of any kind, they wear this, the rainbow jersey.

It seems like everyone would be clamoring to get their hands on it, right? Not exactly. Legend has it that the rainbow jersey is cursed, supposedly making the wearer lose. And many in possession of the jersey have faced some bizarre misfortune.

Tom Simpson, one of the first curse victims, won the road race world championship in 1965, then missed much of the next year due to injuries. He died of a heart attack during the Tour de France in 1967.

Since then, more than a dozen other riders have suffered injuries, illnesses and doping allegations after winning the jersey. So researchers set out to find out what, if anything, is going on with that rainbow jersey.

In a new study published in the British Medical Journal’s annual Christmas edition, Thomas Perneger from the University of Geneva compiled statistics from 1965-2013, tracking the racers during their championship season and the two seasons after that. (Video via Samsung)

He determined that, yes, those with the jersey generally did worse than the previous year, but it has nothing to do with what you’re wearing.

Perneger said the winner "is significantly less successful during the year when he wears the rainbow jersey than in the previous year, but this is best explained by regression to the mean, not by a curse."

So it turns out that it’s not that the rainbow jersey makes you ride more poorly, it’s just that you rode much better than usual in order to win the jersey in the first place. Though plenty of riders have had perfectly good follow-up seasons.

As for the other misfortunes, doping remains a huge problem in cycling, so it’s not surprising many of the top riders would be caught up in that. (Video via Nike)

And crashes at any given race aren't a rarity either. So it appears that the so-called "curse" might just be good luck running out.