Is It Time To Lose Baseball's 'Unwritten Rules'? 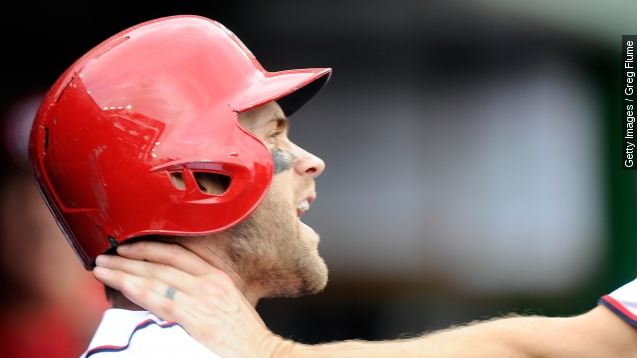 Baseball has a long list of unwritten rules. And the Washington Nationals have broken all these rules in under a week.

Baseball has a long list of unwritten rules. Things like, "Run hard to first base," "If someone hits your teammate with a pitch, your pitcher needs to retaliate" and "Don't fight your teammates in public." The Washington Nationals have broken all these rules in under a week.

Nats closer Jonathan Papelbon started off the drama last week by drilling Orioles player Manny Machado after apparently taking too long with his home run trot earlier in the game.

He didn't, but Papelbon then chastised Harper on Sunday for apparently not hustling on a routine pop out. The two argued and Papelbon decided that would be a good time to try and strangle his teammate during the game.

The fiery closer is done for the season with a four game suspension for the dugout fight and a three game ban for hitting Machado earlier. But this raises a bigger question: is it time to do away with some of these unwritten rules?

"Now, can you imagine that going to work one day just knowing that you're going to get randomly nailed by a 90-mph fastball? And not even for something you did yourself, for something your co-worker did. It's insane," Israel Gutierrez said.

And it's 2015, a year when the NFL is under more scrutiny than ever for its concussion protocols. It seems MLB should make sure its players aren't at risk of baseballs whizzing toward their heads on purpose.

While fans were almost entirely on the side of Harper, Major League Baseball might have a hard time convincing some of their own players of the changes.

Former major leaguer C.J. Nitkowski interviewed some current and former players, and they almost all sided with Papelbon, saying the fight "needed to be done" and he had the "right intentions."

And Harper has been a target of criticism. He's young. He's brash. But he's also one of the best players in the game and as part of baseball's next generation, he doesn't seem eager to keep some of those old-school traditions alive.

Manny Machado and Harper, both in their early 20s, have been critical of the bean ball routine. Machado called Papelbon's antics "coward stuff" and Harper concurred, saying it was "pretty tired."

Papelbon was suspended and fined for his actions against Machado, but that's not necessarily common. But MLB commissioner Rob Manfred is in just his first year, so intentionally drilling opponents could be a new area of emphasis in baseball. (Video via MASN)