Is Proof Of Vaccination Enough To Slow Delta Spread? 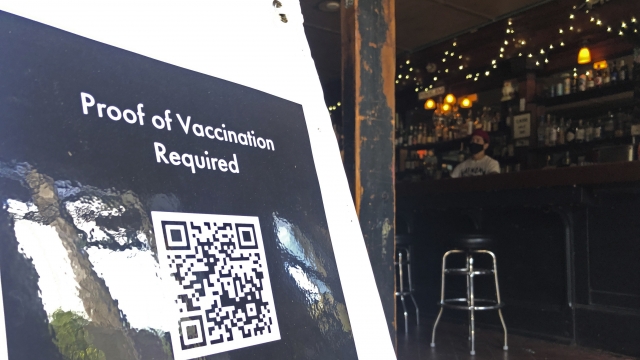 Experts say we're at the beginning of an up curve of a Delta variant surge.

More and more across the country, proof of COVID vaccination is a requirement to go indoors.

”We are asking all customers who come in and hang out to show proof of vaccination,” Malia Spanyol, Bartender, Thee Parkside said.

“If you're vaccinated, all that's going to open up to you. You'll have the key. You can open the door,” Mayor Bill de Blasio, (D) New York said.

Even if proof of vaccination is required, is that enough to stop the spread of the Delta variant?

"The virus is continually mutating, is continually growing. And the reason it's doing that is because we as a human species can't get our act together and stop it in its tracks," Jason Farley, Infectious Disease-Trained Nurse Epidemiologist, Johns Hopkins University said.

We’ve heard this line through the pandemic so far: We're in a race of the COVID vaccines against the variants. Well now, with Delta, we’re losing. Because of the way Delta’s mutated, both vaccinated and unvaccinated people can spread the virus, and because of Delta’s higher viral load, more people can get sick.

"Previously, I would have said the vaccinated are less likely to transmit, and that was true. But the data has changed and that's no longer true. For every single person infected, you're exposing and or infecting five to six other people," Farley said.

Delta isn’t more deadly, but it’s still dangerous. Experts expect to see more cases, hospitalizations and deaths for the next 4-6 weeks because Delta infects more people, and has a shorter incubation period. Meaning someone can be contagious sooner.

"The perfect mental image is that of the Charlie Brown character, of kind of Pigpen. Right. Who always has that cloud just emanating from him in all of the cartoons. And that's like the perfect visual image for someone who's producing a lot of virus," Farley said.

That’s where layered protection can help. Think of it like several walls of Swiss cheese. The idea is that one thing, like masking, won’t stop virus spread. Same with vaccination, or distancing, but adding them all will make a big difference.

"You want to have layers, and so masking is one of those layers. So for me, trying to get two layers of protection at any time. So if it's ventilation, I think that's a layer of protection, masking as another layer and then distancing as a third layer. And so and then vaccination is really the fourth layer. That's a relatively new layer for us,"Dr. Michelle Prickett, Pulmonary and Critical Care Specialist, Northwestern University said.

Billy Joe Agan knows all about those layers. He’s been requiring proof of vaccination in his bar and music venue in Oakland, California, since May.

"For me personally, my wife and I had a child in November. My kid can't get vaccinated. So that's a big motivation for me here, which is I need to operate my business and I don't want to do it and feel compromised when I'm hanging out with my infant. "

He tells Newsy they’ve gotten minimal pushback, but logistically it's been worth it to be back, opened, and feeling safe.

"We got a handful of, like, holistic crystal healing people that kind of got irritated by it, some legal some amateur legal scholars and some like MAGA types, but nothing really too crazy," he said.

They also use that Swiss cheese approach-masking, doors open for ventilation. To date, they’ve had no staff or patron COVID cases. Lindsey Theis, Newsy, California.