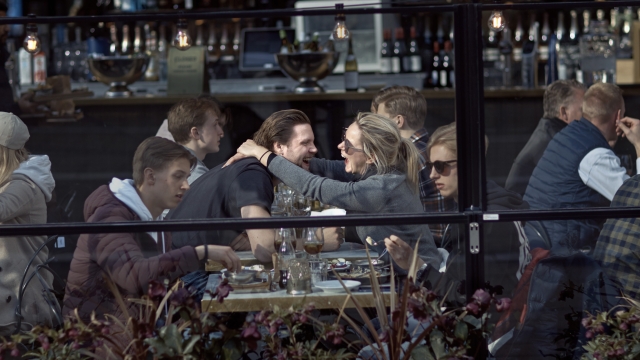 Sweden hopes to trade off slightly higher disease spread for less economic harm. The approach is popular at home despite rising mortality rates.

Millions of people around the world are emerging from lockdowns and learning how to resume semi-normal life. But for citizens of one European country, semi-normal life has been the norm all along.

"People are still going to restaurants. They are going shopping. They're taking walks in the park," said Martin Kolk, a demographer at Stockholm University.

Unlike nearly every other European country, Sweden never imposed a lockdown. Instead, It banned gatherings of more than 50 people, asked the elderly to quarantine and told people to work from home if possible. Most schools and businesses never closed.

"They seem to have accepted a slightly higher level of the spread of the disease in order to avoid adversarial effects on other parts of society," Kolk said.

Sweden's strategy relies on Swedes following health guidelines without being forced. In return, the country hopes to minimize the negative economic and social impacts that come with a lockdown. So how is it playing out?

"By and large, the government has had support for its actions. There has been a substantial share of mortality at elderly homes, and that has been more controversial," Kolk said.

The Swedish approach has been popular at home even though the short-term data isn't flattering. Sweden recorded the highest number of new coronavirus-related deaths per capita in Europe last week. Overall, it has experienced a lot more COVID-19 deaths than other Nordic countries. However, its fatalities per capita remain lower than the U.K., Spain, Italy and France.

"This fight against COVID-19 is a marathon, and the measures taken have therefore been chosen because we strongly believe that they are viable for the long haul," said Swedish Prime Minister Stefan Löfven.

Sweden's hospitals have not been overwhelmed, and about 90% of COVID-19 deaths are people age 70 and over. Löfven says that's highly regrettable but doesn't discredit the country's overall strategy.

"The casualties in Sweden are mostly in elderly homes and the older people. That has nothing to do with people walking in the city," Löfven said.

Swedish demographer Martin Kolk says the current mortality rate in Sweden is still pretty limited despite being higher than in a normal year.

"The effect on population level, the health metrics, is quite limited."

He says the jury on Sweden's approach is still out.

"In order to really evaluate what different countries are doing and to judge both the epidemiological consequences and the societal and economic consequences, it will really have to wait at least one year."