Is The MLB's National League Closer To Adopting Designated Hitters? 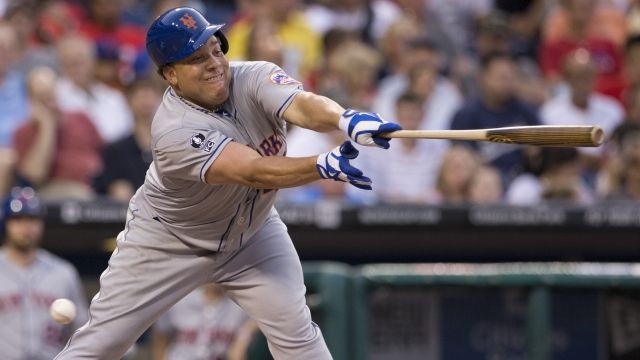 Recent comments from the MLB commissioner put the debate over designated hitters in the spotlight once again.

It doesn't take much to get baseball fans fired up over the designated hitter rule, and recent comments from the MLB commissioner have stoked the fire once again.

Commissioner Rob Manfred told reporters he's seeing a "willingness to change" among National League execs regarding adopting the DH in the Senior Circuit, which has been used in the American League for 43 years. (Video via Fox Sports)

As you might expect, a few National League higher-ups are miffed by Manfred's comments. Phillies chairman Dave Montgomery quipped, "We would like to remain real baseball." (Video via Society for American Baseball Research)

That brand of ball appears to be dying out. Right now, the college game uses the DH, and though pitchers bat in Double-A and Triple-A minor league games, that's only when NL affiliates play each other, which means pitchers go through college ball and the minors with few at-bats under their belt.

This adds up to some ghastly production at the plate. On average, MLB pitchers hit just .132 last year with a .329 OPS, nearly 400 points below the league average.

In some cases, injury is added to insult; last year, Cardinals ace Adam Wainwright tore his Achilles at the plate, sidelining him for five months. (Video via The Increase)

Still, there are plenty of arguments to keep things as they are. For one, it adds strategy to the game as managers try to navigate a pitcher's spot in the lineup. And of course, with the DH in both leagues, we wouldn't get to see Bartolo Colon hit again.

Though, let's remember a league-wide DH rule isn't coming right away. Baseball's owners have yet to even take a hard look at this; Joe Torre, MLB's chief baseball officer, was clear it wasn't a topic of discussion at this week's quarterly meeting.

As for when they will be talking about it, MLB has one year left on its labor agreement with the players' union, which likes the DH since it gives more big contracts to hitters. (Video via Zepp Labs)

This means the resulting labor negotiations will likely be the arena the DH battle is fought in. NL fans — and Bartolo fans — will be watching closely. (Video via WNYW)