Is The NFC East The Worst Division In NFL History? 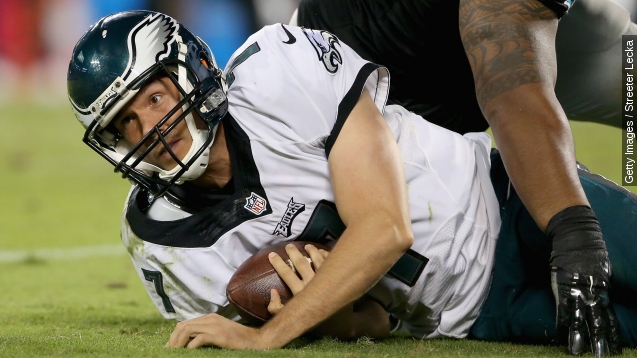 With each of its four teams at 5-7 or below, the NFC East isn't projected to have a team with more wins than losses. Is it the worst division ever?

The NFC East is used to being the class of the NFL. It has 12 Super Bowl wins combined between the Cowboys, Giants, Eagles and Redskins, more than any other division in history. (Video via ABC)

This year is a different story. None of the teams are even expected to have a winning record. With Dallas’ comeback win last night, the top three teams sit at 5-7, while the Cowboys are a game back at 4-8.

But that’s the bad news. The good news is one of the teams will still get into the playoffs as a result of playing within one of the weakest divisions of all time.

According to FiveThirtyEight, Philadelphia is the most likely team to make the playoffs, but they’re projected for just seven wins.

The site also notes there's a 2 percent chance a 6-10 team could still make the playoffs. It’s not a likely scenario, but that would be the worst record ever for a team that made the postseason.

Before 2010, no team with more wins than losses had ever made the playoffs, excluding the strike-shortened 1982 season. But it’s becoming more common.

The 2010 Seattle Seahawks won their division, going 7-9. Last year, the Panthers slid into the postseason with seven wins, eight losses and a tie.

But while this year’s NFC East could give us the worst NFL playoff team ever, it still probably won’t be the worst division in football history. (Video via DirecTV)

One of the most reliable ways to see if a division is any good is to see how its teams fare against non-divisional opponents. And it’s not pretty for the East.

So far, the teams have won a combined 10 of their 30 nondivisional matchups. That would qualify them as one of the 20 worst divisions in American pro sports history.

And, if things really go sideways, the 2015 NFC East could tie the record for the lowest winning percentage ever outside its own division with the 2008 NFC West.

But there still could be good news for the winner. Both teams that won their divisions with losing records managed to get a victory in the postseason.