Is There A Connection Between Tornadoes And Climate Change? 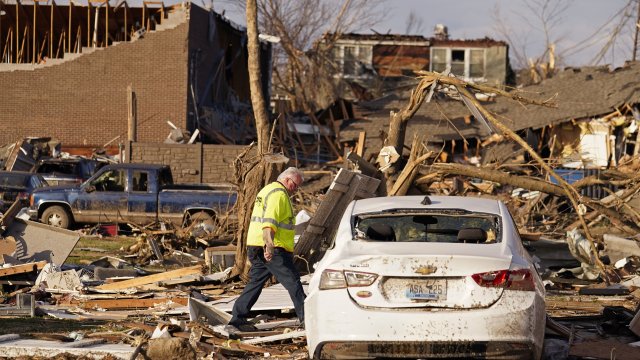 Scientists say a warming planet is bringing extreme heat waves and droughts, but the connection between that and tornadoes is complicated.

Six states all have similar scenes of destruction left in the aftermath of tornadoes that killed 80 people and led to more than 100 others missing.

To some scientists, something about the December tornado outbreak feels different.

Joshua Durkee lives in Bowling Green, Kentucky, where 15 people died. He's also a scientist who studies tornadoes and is the university meteorologist at the University of Western Kentucky.

"We're all shocked by it," Durkee said. "We've seen severe weather in the wintertime. We've had tornadoes during the wintertime. That's not unusual. But this type of event, and the fact that it happened here and not farther south, that's not something that we typically expect."

Lately, he's been increasingly asked if it's connected to climate change.

"We know that climate change is in the DNA of today's extreme weather events," said  James Marshall Shepherd, director of the Atmospheric Sciences program at University of Georgia.

But the relationship between climate change and tornadoes is complicated.

"There are some clues in the scientific literature that there probably is some relationship," Shepherd said. "We as scientists, we just want to nail that down.  But the firm point that I want to leave you with is that we do know climate change is affecting extreme weather."

As people keep warming the planet, scientists say we are loading the dice, creating exactly the type of conditions you'd expect to help supercharge the kind of storms that spawn tornadoes.

"The Gulf of Mexico, for this time of year, is quite warm, and so there has been some speculation at least that that could have played a role in this particular tornado outbreak," Shepherd said. "And of course, we know that ocean temperatures in the Gulf of Mexico are warming in response to climate change."

Researchers say even though it seems like there are more tornadoes these days, it's more likely we're just getting better at spotting them.

"You have a greater population, so better chance of experiencing tornadoes," Durkee said. "We have incredible technology now — the ability to find storms."

While the climate-tornado connection is still being studied, scientists warn that a future of weather extremes is already here.

"We're seeing these types of things move at a pace that is within a lifetime," Durkee said. "These things are happening now, and this isn't something we're waiting on in the next 1,000 years. This is happening."