Is Yoga A Peaceful Practice Or Product Of Cultural Genocide? 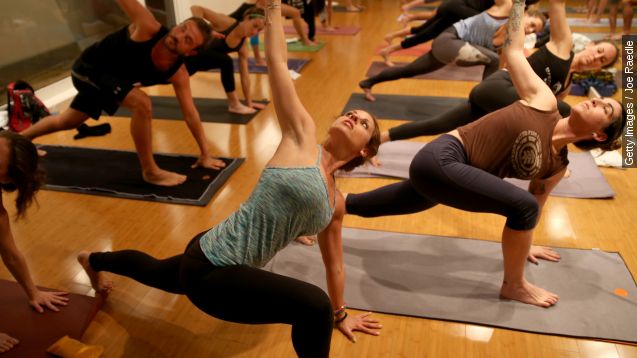 We thought it was supposed to be all about deep breathing, good balance and form-fitting pants. But we might be wrong. The peaceful practice of yoga is causing a bit of an uproar at one Canadian college.

A yoga class at the University of Ottawa was canceled after concerns that the practice traces back to "cultures that have experienced oppression, cultural genocide and diasporas due to colonialism and western supremacy."

Let us break it down for you. That culture mentioned a second ago is talking about Indian culture. And India used to be a British colony, hence the "experienced oppression" piece of that statement.

The class, formatted to include disabled students, was shut down after a student representative from the University of Ottawa emailed the instructor. According to The Washington Post, that instructor questioned the email and got this response, it reads in part: "Yoga has been under a lot of controversy lately due to how it is being practiced and what practices from what cultures (which are often sacred spiritual practices) they are being taken from." (Video via University of Ottawa)

Yoga is an ancient Hindu practice. And some Indians are fighting against its "Westernization."

An Indian man studying to be a yoga instructor told The Washington Post, "The West has manipulated yoga for their own benefits. It's more like exercise. But traditional yoga is much more than that; it's ultimately about achieving enlightenment for the soul."

Last year, India appointed a minister of yoga to bring the practice back to its roots. In addition, the Hindu American Foundation launched a campaign called Take Back Yoga. (Video via NDTV)

But it's worth pointing out, in the past India has also championed for the spread of yoga. A writer for Slate says, "Indian nationalists believed, rightly, that if they could popularize their spiritual practices in the West, they would win support for independence."

And there's also the fact that India's prime minister pushed for an International Yoga Day. Which he got.

So as some groups fight to reclaim yoga, it's estimated more than 20 million Americans are taking part in the practice. We're thinking that class of 60 people in Canada isn't looking too offensive after all.