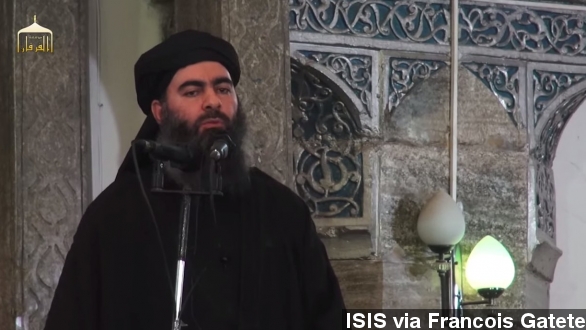 Authorities have detained the wife and child of ISIS leader Abu Bakr al-Baghdadi at a border crossing in Lebanon.

Authorities in Lebanon have detained the wife and son of ISIS leader Abu Bakr al-Baghdadi on the border with Syria.

The ISIS leader's wife and son were reportedly apprehended at a border crossing some 10 days ago, and the Lebanese ministry of defense has been questioning them since. (Video via YouTube / Francois Gatete)

Lebanese newspaper As-Safir broke the news and pointed out that although the two were apprehended more than a week ago, the military has kept quiet about it.

There are a few reasons why the military has waited to make a statement until now, but one theory says it all comes down to leverage.

Al Jazeera's Jane Ferguson said: "Let's not forget that 26 Lebanese soldiers are being held on the border with Syria by armed groups like ISIL and the Nusra front. They've been held since August, putting the Lebanese authorities under incredible amounts of pressure to get them back."

The Lebanese military has repeatedly come into conflict with ISIS along the country's Syrian border, with Syrian refugees often getting caught in between. (Video via RT)

For example, in one instance during fighting, The New York Times reports "witnesses said Lebanese Army checkpoints were refusing to let the refugees relocate deeper into the country. Some refugees said they were panicking because they had nowhere to go."

According to an Iraqi official in mid-November, an airstrike managed to wound al-Baghdadi, although Pentagon officials never confirmed that claim. (Video via BBC)

It's not immediately clear what the Lebanese government plans to do with al-Baghdadi's wife and son.