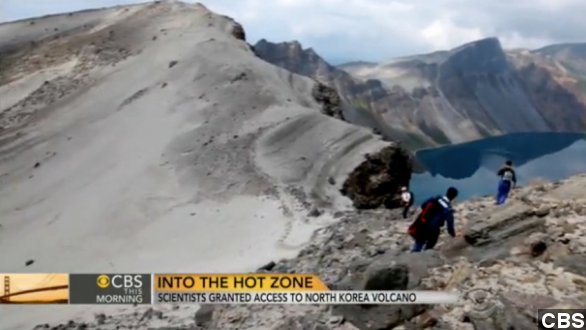 The secretive country of North Korea has asked for international assistance to study Mount Paektu, which is showing signs of activity.

The Mount Paektu volcano in North Korea is showing signs of activity, and for the first time ever, two foreign scientists are being given access to study the massive volcano. And they've got a lot of work ahead of them.

CBS: "This is such a big volcano that we know very little about."

CBS explains the two British volcanologists were "seemingly chosen at random and invited by the reclusive government" after eruptions beneath the volcano made residents fearful.

As The Guardian points out, the volcano is getting attention not only for its potential to do a lot of damage but also because the secretive country of North Korea has asked for international assistance.

Which is probably a smart move. More than 1,000 years ago, the volcano erupted, and it was one of the largest ever recorded. Rock and magma emerged, and a layer of ash covered much of the region. (Video via YouTube / Jan Frieder-Hain)

The landscape was transformed, and the eruption left behind this 3-mile hole in the earth, now known as Heaven Lake.

CBS: "It's hard really to imagine the scale, but you're talking about something like a million nuclear weapons going off at the same time."

International Business Times reports the scientists are currently "looking to find out what happened when the volcano last erupted, what effect it had on the surrounding ecosystems and whether it will erupt again."

With the volcano sitting on the border of North Korea and China and the new involvement of scientists from the U.K., this volcano is making people across the globe put their political differences aside.

One of the chief scientists involved with this project told Imperial College London: "A volcano that may erupt can have local impacts, it can have regional impacts and it can have global impacts. It's something we really need to understand. There is nothing political about it. Understanding a volcano, that's just good for humanity."

The U.K. scientists have visited the volcano three times so far. Although it's active, researchers and scientists don't know yet if or when it will erupt.