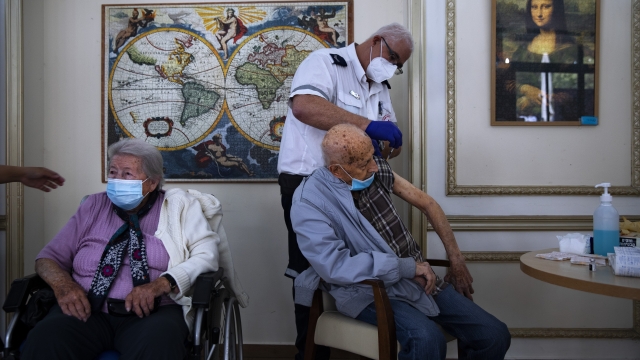 Those 60 and older who are already fully vaccinated can get a third dose of the Pfizer-BioNTech vaccine.

Israel’s prime minister on Thursday announced that the country would offer a coronavirus booster to people over 60 who have already been vaccinated.

The announcement by Naftali Bennett makes Israel the first country to offer a third dose of a Western vaccine to its citizens on a wide scale.

“I'm announcing this evening the beginning of the campaign to receive the booster vaccine, the third vaccine,” Bennett said. “Reality proves the vaccines are safe. Reality also proves the vaccines protect against severe morbidity and death. And like the flu vaccine that needs to be renewed from time to time, it is the same in this case.”

Pfizer Says Booster Shots Are Coming. Do Americans Need Them?

Pfizer says its vaccine loses effectiveness over time and is seeking approval for booster shots. U.S. regulators aren't convinced they're needed yet.

Anyone over 60 who was vaccinated more than five months ago will be eligible. Bennett said the country's new president, Isaac Herzog, would be the first to get the booster on Friday.

It will be offered to the general public on Sunday.

Neither the U.S. nor the EU have approved coronavirus booster shots. It’s not yet proven if a third dose helps and, if so, who needs one and when.

Israel has used the Pfizer/BioNtech vaccine on its population. Previously, boosters were used in some countries with the Chinese and Russian vaccines.

The World Health Organization said earlier this month that there is not enough evidence to show that a third dose is needed.