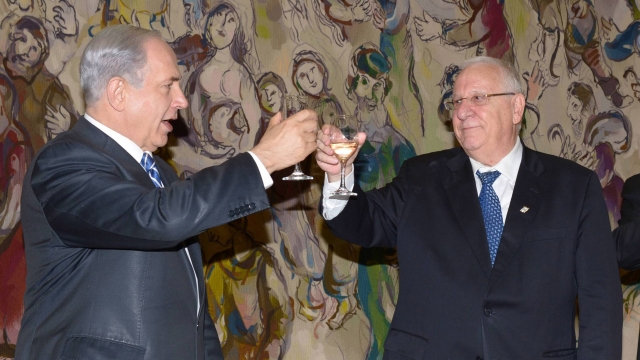 Netanyahu will have 28 days to assemble some kind of a majority in Israel's parliament.

Netanyahu accepted the mandate during a televised ceremony on Wednesday. This comes after the official final results from last week's election showed that Netanyahu's Likud party had secured 32 seats in the country's parliament, while his chief rival Benny Gantz' Blue and White party secured 33.

Rivlin had proposed that Netanyahu and Gantz form a coalition government, with both men taking turns as the country's prime minister. The two met for talks on Tuesday but failed to produce a deal.

Netanyahu said Wednesday that he believes a unity government was still the best solution to end the stalemate, saying, "We have been through a tough election campaign, and now we need to unite the people." Netanyahu has 28 days to assemble a coalition; he'll need at least 61 of the 120 lawmakers in Israel's parliament on his side. If he fails, he'll have to return the mandate to the president, opening up the possibility for the country's third election of the year.