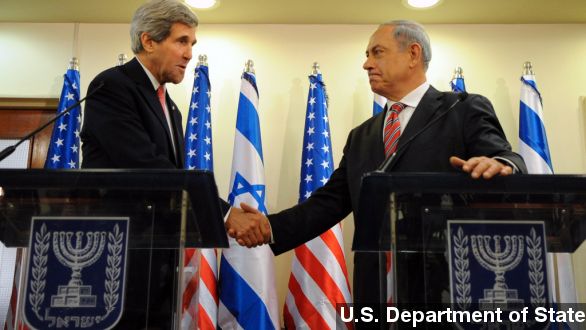 Olmert downplayed the significance of the leaks when they first came to light, calling the hacked email accounts "an unimpressive target." He added, "I would be surprised if there was any attempt by American intelligence in Israel to listen to the prime minister's lines." (Via The New York Times)

But not everyone in Israel was as dismissive of the NSA's snooping, and Israeli officials vented their ire ahead of Sunday's cabinet meeting in Jerusalem.

The country's Intelligence and Strategic Affairs Minister told Israel Hayom the NSA's surveillance undercuts the cooperation between Israeli and U.S. intelligence services. "We share everything with them. ... Under these conditions, it is unacceptable to behave this way."

And the revelations sparked a renewed push to free Jonathan Pollard, a citizen of both the U.S. and Israel who was sentenced to life in prison in 1987 for passing classified U.S. intelligence to Israel. (Via CNN)

One campaigner for Pollard's release told The Jerusalem Post, "It is inconceivable that while Pollard has been rotting in an American prison for decades for spying ... we are now informed that the US has been spying against Israel, and this is just swept under the rug."

During Sunday's cabinet meeting, Israeli Prime Minister Benjamin Netanyahu said he would continue to push the U.S. to free Pollard but added Pollard's release is "neither conditional on, nor related to, recent events." (Via The Washington Post)

A U.S. presidential review group recently released a report outlining 46 recommendations for reforming American surveillance practices. President Barack Obama told reporters he will make a definitive statement on surveillance programs when he returns from vacation at the end of the month.