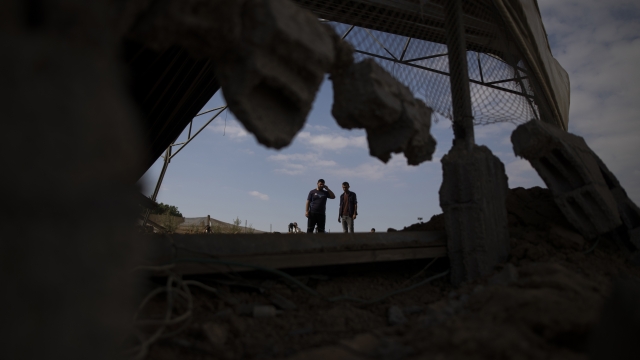 Israel says it carried out the strikes in response to three separate rockets launched toward it.

Israeli aircraft struck a series of targets in the Gaza Strip early Monday while Palestinian militants launched rockets into Israel in the third consecutive night of fighting between the sides.

The violence took place shortly before Israel's prime minister, Naftali Bennett, was heading to Egypt for a visit expected to focus on Egyptian efforts to broker a long-term truce between Israel and Gaza's Hamas rulers in the wake of an 11-day war last May.

Those efforts appear to have come to a standstill in recent weeks. Tensions have further risen after last week's escape from an Israeli prison by six Palestinian inmates.

The Israeli military reported three separate rocket launches late Sunday and early Monday, saying at least two of them were intercepted by its rocket defenses. It said it attacked a number of Hamas targets in retaliation. There were no reports of casualties on either side.

Israeli officials say they've put up roadblocks, are conducting patrols of the area and have relocated 400 prisoners as a protective measure.

Last week's prison break appears to have heightened tensions across the region, with Palestinians staging a number of protests in solidarity with the men. In Palestinian society, nearly every family has seen a member imprisoned by Israel, and the thousands of prisoners held by Israel are widely seen as heroes paying a price for the national cause.

Over the weekend, Israel caught four of the six Palestinian inmates, who tunneled out of a maximum security prison on Sept. 6. Palestinian militants reacted to the arrests with rocket fire. Israel's search for the last two prisoners is continuing.

The Egyptian-mediated efforts to deliver a long-term truce have struggled with the sides unable to agree on a system to renew Qatari payments to needy Gaza families. Israel has demanded guarantees that Hamas does not divert the money for military use.

Hamas is pushing for Israel to end a crippling blockade that has devastated Gaza's economy, while Israel is demanding that Hamas free two captive Israeli civilians and return the remains of two dead Israeli soldiers.

Hamas has controlled Gaza since ousting the forces of the internationally recognized Palestinian Authority in 2007, a year after the Islamic militant group won Palestinian parliamentary elections.

Since then, Israel and Hamas have fought four wars and numerous smaller rounds of fighting.

Israeli Foreign Minister Yair Lapid on Sunday called for a new approach to end the cycle of fighting with Hamas, describing a plan of international investment in Gaza’s infrastructure in exchange for pressure on Hamas to halt its military buildup and preserve calm.

Much about his proposal — which he said was made in consultation with the United States and other countries — has been floated before but never implemented due to the fighting, deep distrust and bitter internal divisions on both sides.