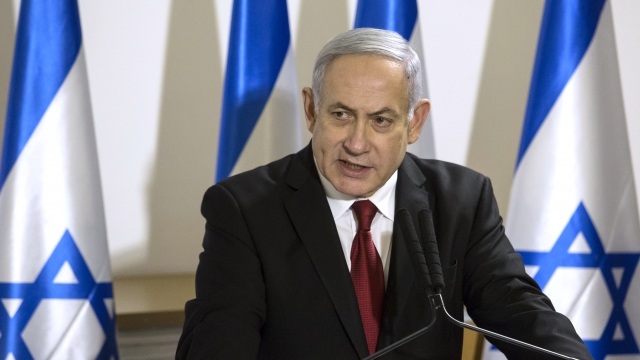 Israeli Prime Minister Benjamin Netanyahu has been charged with bribery, fraud and breach of trust.

Israeli Prime Minister Benjamin Netanyahu has been formally indicted on corruption charges with the Jerusalem District Court. This means Netanyahu will become the first sitting PM to face a criminal trial in the country.

The first case alleges he provided regulatory favors to the shareholder of an Israeli telecom giant in exchange for favorable coverage. The second case alleges the prime minister and his family wrongfully accepted lavish gifts from two wealthy businessmen. And the third case alleges Netanyahu offered advantageous law for a newspaper in exchange for positive news coverage.

Netanyahu has repeatedly denied any wrongdoing in all three cases. The indictment was submitted in court after Netanyahu withdrew his plea for parliament to support his request for immunity.

Even with the formal indictment, Netanyahu will be allowed to remain in power. He'll only be forced to resign if he is convicted and has exhausted the appeals process.

Netanyahu is in the U.S. Tuesday for President Donald Trump's announcement of his plan to end the Israeli-Palestinian conflict.