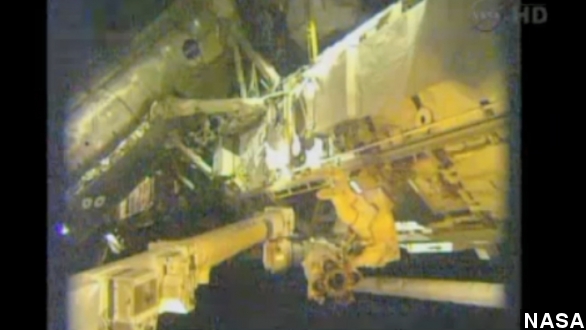 Two American astronauts stepped outside the ISS on a dangerous mission to fix an urgent issue with the station's cooling system.

This is NASA video of a spacewalk that took place Saturday morning and into the afternoon. Rick Mastracchio, in the red striped suite on the left, and Mike Hopkins in the all-white suite — both Americans — are conducting emergency repairs on the International Space Station.

But for Hopkins, it's a first. Before stepping out, he tweeted "Pretty cool day."

A former astronaut weighed in on just how surreal the experience is. (Via Twitter / @Astrolllini)

"The enormity of the station is not lost on you, especially when you go outside and you're touching it and realizing that you are but a small fraction of the human population that ever gets to do this and to see the world from that vantage point. And you do get the sense that you are alone." (Via NASA)

​"In this spacewalk, they'll ride the robot arm to replace the refrigerator-sized pump that has a faulty valve. One major risk is that they'll have to break into the station's cooling system, which contains ammonia." (Via WECT)

Veteran Japanese astronaut Koichi Wakata controlled that robotic arm from inside the ISS.

This delicate mission will take more than just Saturday's six-and-a-half-hour walk. Two more spacewalks are needed in order to complete the repair. The second walk is scheduled for Monday.

"They do hope that they might not need that third spacewalk if they can get it done in time, because that one is actually planned for Wednesday, Christmas Day. So they are hoping to give the two Americans Christmas Day off." (Via CBC)

There are many hazards when it comes to spacewalks. As National Geographic points out, it is one of the most dangerous parts of an astronaut's mission.

Punctures are a major concern. A hole can be created by micro-meteors or metal shards as tiny as a grain of sand and could lead to catastrophic effects. Throughout the mission, the astronauts' gloves and suits are periodically checked.

Another potential issue: detachment from the station. The men are tethered both to the station and to each other.

"Effectively it's an emergency jet pack for astronauts for if they become untethered from the station. ... press a button and be taken back to safety." (Via YouTube / PTC)

And possibly one of the biggest worries with this particular mission is the potential for leaking water in the space suits. That's what happened back in July to Italian astronaut Luca Parmitano. That same suit is being used in this walk.

ANCHOR: "He nearly drowned after his helmet suddenly filled with water."

ASTRONAUT: "Water's in his eyes now, and it seems to be increasing. We think we're going to terminate."

​ANCHOR: "Fellow astronauts were able to get him inside and remove his helmet." (Via NBC)

Since then, the astronauts aboard the ISS haven't left the spacecraft. This time, the two on the current mission are wearing absorbent pads in their helmets and breathing tubes as a precaution. (Via Collect Space)

This walk is considered urgent because if a second pump were to fail, they would have to abandon the station.