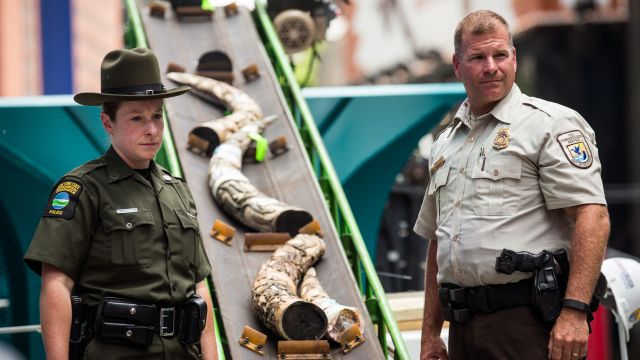 The new rules aim to ax smuggling networks and end the poaching of African elephants.

The new rules, issued by the U.S. Fish and Wildlife Service, aim to ax smuggling networks and end poaching of African elephants.

It's estimated 96 African elephants are killed daily for their ivory tusks. A lot of that ivory ends up here in the U.S. A 2008 study pegged the U.S. as having the second-largest retail market for elephant ivory products.

Under previous guidelines, people were free to buy and sell ivory in the U.S. as long as it could be proven the animal died of natural causes or was hunted before the species was considered endangered.

The new guidelines reel that in dramatically, creating what officials call a "near-total ban." Now virtually all import, export and sales across state lines is illegal. There are exceptions — but they're very specific, designed to allow some antiques and pre-existing manufactured items like musical instruments to be traded.

But officials say greater protections are needed on a federal level. President Obama announced an initiative to end wildlife trafficking back in 2013. It appears Thursday's announcement is a step in that direction.

The Fish and Wildlife Service director said: "Our actions close a major avenue to wildlife traffickers. ... We still have much to do to save this species, but today is a good day for the African elephant."

The rules go into effect July 6.

This video includes clips from ABC and The Tennessean and images from Getty Images.