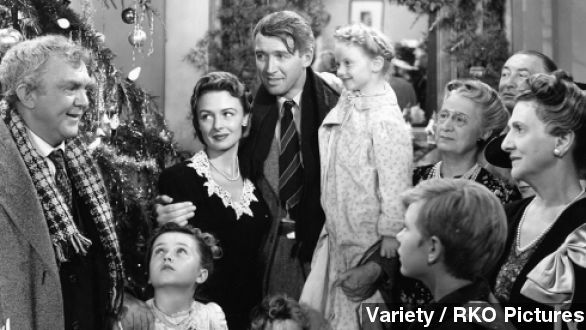 George Bailey's unlikeable grandson will get a visit from his guardian angel/aunt in the sequel. Spoiler alert: it's Zuzu.

Every time a bell rings, an angel gets its wings. Anyone who's seen the 1946 film "It's a Wonderful Life" knows this. What we don't know is — what kind of bell do you have to ring for a movie to get its sequel nearly seven decades later?

A cash register, perhaps? Variety reports "It's a Wonderful Life: The Rest of the Story" is slated to hit theaters in 2015. Its budget will fall in the $25-35 million range.

Frank Capra's legendary Christmas classic told the story of George Bailey, a down-on-his-luck banker who wishes he had never been born. Thanks to guardian angel, Clarence, Jimmy Stewart's Bailey gets a peek at how bad things would've been without him. (Via RKO Pictures)

The sequel will feature Karolyn Grimes — who played George Bailey's daughter Zuzu in the original.  (Via Liberty Films)

Except USA Today says George Bailey v2 is supposed to be unlikeable. And his guardian angel shows him how much better the world would've been without him. Ouch.

A writer for Time isn't feeling the holiday cheer, either, saying: "Somewhere Frank Capra is rolling over in his grave." Meanwhile, the sequel's producers are in contact with other living cast members to reprise their original roles.

According to The Hollywood Reporter, the original film's rights were in the public domain — opening the door to a new screenplay — which is already done. A lapse in the film's copyright back in 1974 is credited with its boom in popularity since everyone could show it for a while.

The project is a collaboration between Star Partners and Hummingbird Productions. Star Partners provided financial backing for 1980s hits "Rain Man," "The Right Stuff" and "The Color Purple."