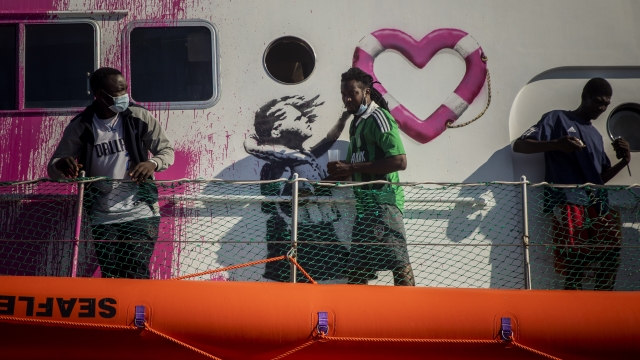 The ship, funded by British street artist, waited more than 12 hours for the most vulnerable to be rescued.

The pink and white vessel — named Louise Michel after a French anarchist — sent out an S.O.S. after picking up more than 200 migrants in the Mediterranean Sea. The Twitter account for the ship's 10-person crew said the deck was overcrowded, with people overflowing into lifeboats. The ship couldn't move for more than 12 hours while awaiting aid.

Maltese authorities requested the Italian Coast Guard send help. Authorities took the most vulnerable people from the ship, as well as the body of a person who had died before the Louise Michel reached him.

The U.N. Refugee Agency reports hundreds of thousands of people make the dangerous Mediterranean trek to seek refuge in Europe every year. Thousands die or go missing. The agency is calling for the safe disembarkation of the Louise Michel.