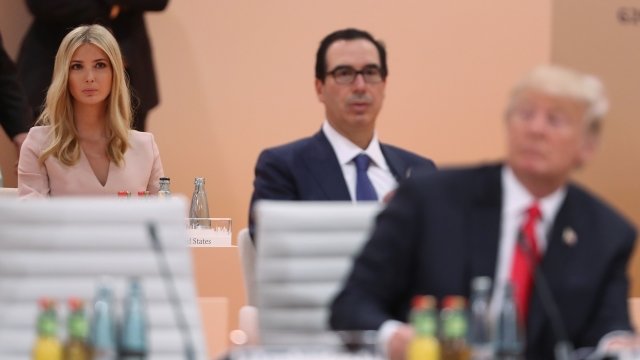 In an unusual move, Ivanka Trump briefly filled in for President Trump at a meeting during the G-20 summit.

When President Donald Trump briefly stepped out of a meeting at the G-20 summit, he had an unusual choice for a replacement: his daughter Ivanka.

This is a bit of a surprise from someone who, less than a month ago, told Fox News she tries to stay out of politics.

World leaders are busy and often have to step out, so it's pretty normal for someone to take their place. But the fill-in is usually a senior official, like a Cabinet member.

Both Treasury Secretary Steven Mnuchin and Secretary of State Rex Tillerson were at the conference, and it appears that Mnuchin was at the meeting.

Ivanka Trump is an unpaid presidential adviser and reportedly wields a lot of influence in the White House. That's rubbed some people the wrong way, since appointing family members to political positions poses several ethical questions.

Ivanka Trump attended G-20 to talk about women's issues, and, as part of the American delegation, she can step in for the president. But she's been at a lot of her father's presidential meetings — some while she was still running the Trump Organization.

Ivanka Trump drew conflict of interest concerns when she met with Japan's Prime Minister Shinzo Abe just after the election, before she was officially appointed to a White House position.