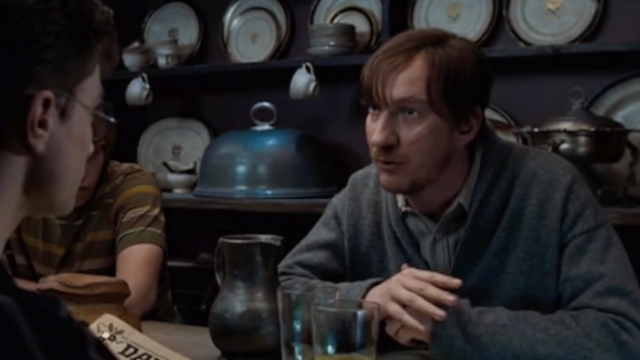 Warner Bros. / 'Harry Potter and the Order of the Phoenix'

This year marks the 18th anniversary of the Battle of Hogwarts, and to pay her respects, "Harry Potter" author J.K. Rowling is apologizing for the death of everyone's favorite Defense Against the Dark Arts professor.

Fans first met Remus Lupin in book three when he saved Harry from a dementor. He perished in the Battle of Hogwarts in book seven, along with his wife, Nymphadora Tonks.

Apologizing for killing off characters has become something of a tradition for Rowling.

In 2014, she held a moment of silence. Last year, she apologized for Fred, saying she started with him because he was the most difficult character for her to kill off. And this year was Lupin's turn.

Rowling explained Lupin ultimately ended up dying so Ron's father, Arthur Weasley, could live, tweeting, "The only time my editor ever saw me cry was over the fate of [Lupin's son] Teddy."

In fact, killing off Teddy's parents was a very calculated move on Rowling's part.

After the final book in the series was released in 2007, Rowling told NBC: "I wanted there to be an echo of what happened to Harry just to show the absolute evil of what Voldemort's doing. The fact that you leave orphans and you leave children who then have to make their way in the world uncared for and unprotected."

Rowling can keep this apology tradition going for many years to come, since she killed off plenty of characters during the Battle of Hogwarts.

And afterward, she can always move on to important characters who perished in other books, right? 'Cause we still haven't gotten over the death of Sirius Black.

This video includes clips from Warner Bros. and images from Getty Images.