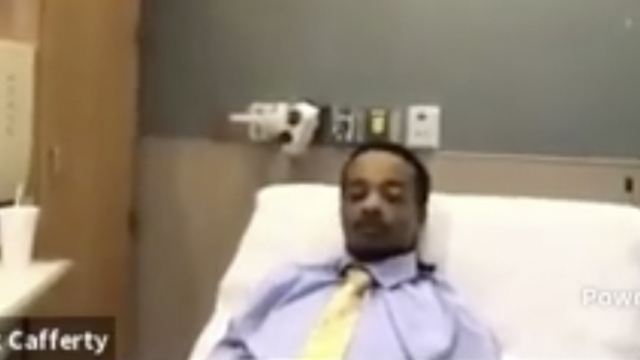 Blake said he is in "nothing but pain" all day and has staples throughout his back and stomach.

Jacob Blake spoke publicly Saturday for the first time since Kenosha, Wisconsin police officers shot him seven times in the back, saying "It hurts to breathe, it hurts to sleep, it hurts to move, it hurts to eat."

In the video posted by his lawyer Ben Crump, Blake said with staples throughout his back and stomach, he is in "nothing but pain" 24 hours a day. He also shared his feelings on potentially never walking again.

"Your life, and not only just your life, your legs, something you need to move around and forward in life, can be taken from you like this.”

In August — a White police officer shot Blake, a Black man, in the back after he walked away as officers tried to arrest him. A video of the encounter went viral on social media sparking protests, property damage, the shooting deaths of two demonstrators, and civic unrest in Kenosha.

Blake said: “Please, I'm telling you, change your lives. Stick together, make some money, make everything easier for our people out there, man, because there’s so much time that’s been wasted.”

Police were responding to a 911 call from a former girlfriend of Blake, who said that he was not permitted at her home and that he had taken her car keys. Blake had an outstanding warrant on charges of sexually assaulting a woman and police say he was armed with a knife when he was shot by an officer during the arrest.

Blake pleaded not guilty to the assault charges through a Zoom call on Friday.

The officers in the August 23 shooting of Blake have been placed on administrative leave pending an investigation.