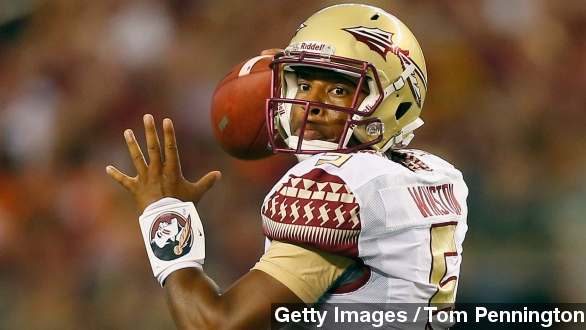 A former state judge has ruled FSU quarterback Jameis Winston did not violate the school's code of conduct in the 2012 sexual assault case.

A former state judge has ruled Florida State University quarterback Jameis Winston did not violate the school's code of conduct saying there wasn't enough evidence to find him guilty of wrongdoing in a 2012 sexual assault case.

In a statement obtained by USA Today, former Florida Supreme Court Judge Major Harding said, "This was a complex case, and I worked hard to make sure both parties had a full and fair opportunity to present information. In sum, the preponderance of the evidence has not shown that you are responsible for any of the charge violations of the Code. Namely, I find that the evidence before me is insufficient to satisfy the burden of proof."

The former Heisman trophy winner was accused of sexual assault by a female FSU student in December 2012. (Video via YouTube / Dustin Tackett)

The state of Florida had previously ruled in 2013 that Winston wouldn't face criminal charges in the case, but FSU launched its own investigation to see if he violated the school code of conduct under Title IX, which covers gender discrimination.

The woman's lawyer was shocked by the judge's decision and is considering making an appeal. He's quoted in the Orlando Sentinel saying, "We are stunned and dismayed by the order. ... It’s not a 'decision' at all but a statement that the judge couldn't decide."

He also claimed there were two other FSU students present during the alleged assault, but only the female student was called to testify, which, according to him, "doesn’t even follow the student conduct code, and it ignores the bulk of the evidence."

Instead of testifying during the two-day hearing in early December, Winston reportedly opted instead to read a five-page statement claiming his innocence, saying the sex was consensual.

Winston has not missed any playing time during the two-year ordeal, and he'll likely be taking snaps for the Seminoles heading into the first ever College Football Playoff.

Florida State is currently the only undefeated team at 13-0 and will face Oregon in the Rose Bowl Jan. 1, while Alabama battles Ohio State in the Sugar Bowl. The winners then move on to play for the national championship Jan. 12. (Video via YouTube / CampusInsiders)