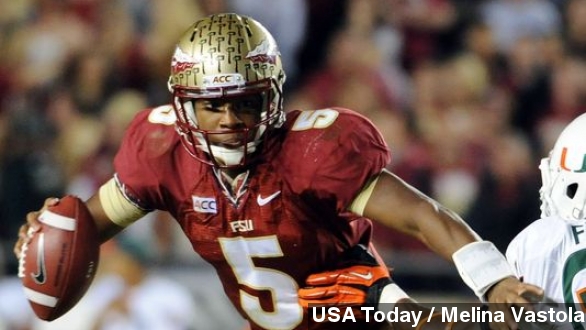 ​"We've carefully examined all the evidence in this case, and we have concluded that no charges will be filed against anyone in this case." (Via Bay News 9)

"In the laboratory work that we did, there were DNA from males. One was identified as being Winston's DNA, and the other one was unknown." (Via WPLG)

"Her blood alcohol level at the time her blood was taken was .04, which is not very high, and we found no evidence of any drugs of any sort in her blood system." (Via ESPN)

Sexual assault charges were being sought against Winston by a female FSU student. The accuser claims Winston raped her last December while intoxicated. Winston's DNA was found in the woman's clothes, but he says the sex was consensual.  (Via News 12 Long Island)

Through an attorney, the family of the accuser made a public statement last month saying, "To be clear, the victim did not consent. ... This was a rape." (Via NBC)

Officials said the linking of Winston's DNA to the accuser doesn't mean a crime was committed but that the two did have close contact.

If Winston had been charged with a felony, he would be suspended from the team immediately under FSU's code of conduct. And that would spell problems for No. 1-ranked Seminoles, who are poised for a BCS bowl game with Winston, who was named ACC player of the year. (Via CBS)

Prior to the press conference, an SB Nation writer pointed out that since Winston's attorney was not notified about charges late Wednesday, state officials were unlikely to pursue the case.

"Typically, if a high-profile person represented by an attorney is to be indicted, the prosecutor will notify the alleged perpetrator's attorney and allow the lawyer to coordinate his client's surrender to police. A press conference would convene only after the accused had appeared or notified the prosecutor that he refused to voluntarily appear, necessitating an arrest."

Among his many other accolades, Winston is also a candidate for the Heisman Trophy. FSU and Winston will take on Duke this Saturday in the ACC Championship game.